The Socialist v. The Social Darwinist 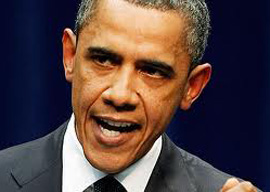 Obama’s strategy comes straight out of the old socialist Saul Alinsky’s Rules for Radicals: “Pick the target, freeze it, personalize it, and polarize it.”

Demagogic though his rhetoric may be, Obama’s argument has appeal. Millions of Americans agree with his fundamental points. The rich have gotten richer. The gap between rich and middle class has grown. Workers” wages have remained largely stagnant.

A second strength of the Obama campaign is that today, if one adds up all of government’s beneficiaries and employees, the total exceeds 91 million Americans. Moreover, half of wage earners have by now been dropped from the federal income tax rolls.

The process has been going on since the Great Society was launched after Barry Goldwater’s defeat in 1964.

Each decade, more Americans are dropped off the income tax rolls, more move onto government payrolls, and more sign up for benefits from government programs.

If you benefit from programs you pay nothing to support, why would you vote for a Republican president who would cut those programs?

Not only ideology but the interests of scores of millions of Americans now dictate a vote for the party of government and against any party that promises to cut government.

We have arrived at the fail-safe point of the American republic. If we do not roll back government now, we will end up having to do it the way they are doing it in Italy, Spain, and Greece, accompanied by riots in the streets.

The strategy Obama has chosen”to turn the 2012 election into a choice between standing with the middle-class many or the Wall Street few”is not only polarizing. It may prove perilous for President Obama.

First, it is divisive and partisan, stripping Obama from all pretense of being the uniter who can bring red state and blue state together.

Second, though this populist assault will energize the left, it will unsettle the middle and depreciate the most precious political assets Obama has”his presidential office and his personal reputation as a nice and likable man.

Third, the timing is wrong. Such crescendo rhetoric usually comes in the last seven days before an election, not seven months.

Moreover, a campaign to demonize Romney as a right-wing extremist would represent a de facto admission by Obama that he cannot win running on his record.

This tactic succeeded for the Democrats with Goldwater in 1964; it failed with Ronald Reagan in 1980. Romney’s political history and benign persona suggest that it will fail again.

Nevertheless, while Romney stays on the high road, his surrogates may have to dial up their rhetoric soon to match that of Barack Obama.