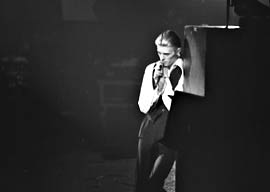 When it seemed as if his career was imperiled by making what modern society deems to be truly deviant comments, Bowie immediately backpedaled and made it quite clear that he was NOT a fascist and never had been one. A cross-dressing bisexual coke addict, sure, but NOT a fascist. He also explicitly denied being “sinister.” The lesson: It’s OK to be “transgressive,” but let’s not push it. You can step right over any line except the ones your masters have drawn for you. So be a good boy: Throw away that Himmler biography and go put on another dress.

Since no one with any weight in the musical industry held Bowie’s feet to the fire for the cross-dressing or the wiener-gobbling, he never blamed those things on the cocaine, only the fascism. And for the most part, his fans seemed to buy it”only someone completely zonked out of their dome on drugs would say anything nice about Hitler, right? At the time he claimed to be subsisting on “red peppers, cocaine, and milk,” so a demented lapse into fascist sympathizing is completely understandable from a dietary perspective. Some of his apologists went to hilariously convoluted lengths attempting to explain that Bowie was such a complicated artist that he was actually condemning fascism by appearing to endorse it.

In the wisest of his many wise career moves, Bowie killed the Thin White Duke, recorded some stupendously awful blue-eyed soul music, Christmas songs with Bing Crosby, a cringeworthy dance video with a former gay lover, and spent the last quarter-century of his life married to a Somalian supermodel. Whether it was all an elaborate effort to prove to the world that he wasn’t a Nazi, only Bowie and his hairdresser knew for sure.

The world has lost its most celebrated Typical Queer Nazi. David Bowie is dead, but “ghost force liberalism” still permeates the air in America. The Thin White Duke is now merely a Thin White Corpse.