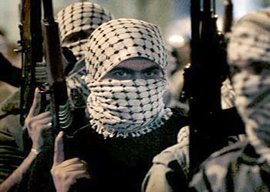 This is the city U.S. air power saved when Moammar Gadhafi’s forces were closing in. It now appears to be an al-Qaidaville where U.S. diplomats and agents dare not tread.

Late last week, Secretary of State Hillary Clinton conceded that the Benghazi murders were acts of terror perpetrated by extremists associated with al-Qaida in the Islamic Maghreb. She alluded to Mali, where an al-Qaida affiliate, the Ansar Dine, has taken over half the country.

How grave is that threat?

On Thursday, The Associated Press reported that Gen. Carter Ham, head of the U.S. Africa command, met with Mauretania’s president to discuss “a possible military intervention … in north Mali against al-Qaida-linked group members and their allies.”

Yet Vice President Joe Biden still campaigns through the Rust Belt bellowing, “General Motors is alive, and Osama bin Laden is dead,” and Obama still recites his mantra, “al-Qaida is on the path to defeat.”

The reality. Al-Qaida affiliates have taken over a region of Mali the size of France. Al-Qaida in the Islamic Maghreb may have been in on the Benghazi massacre. Al-Qaida is in Syria fighting for a cause, the overthrow of Bashar Assad, Obama supports. Al-Qaida has helped reignite sectarian war in Iraq. Al-Qaida remains in Pakistan. Al-Qaida in the Arabian Peninsula is in Yemen.

We failed to cut out or kill the cancer at Tora Bora in 2001, and it has since metastasized and spread across North Africa, the Middle East and South Asia.

As for the Arab Spring Obama embraced, that has given us the Muslim Brotherhood in Cairo and jihadi in Sinai. Our departure from Iraq paved the way to a new sectarian war. The surge troops are out of Afghanistan, and the remaining U.S. troops no longer partner with the Afghan soldiers who are to take over the war.

Any doubt about the outcome there when we’re gone?

Within the past month, anti-American riots, flag burnings and the raising of Islamist banners atop U.S. embassy facilities have occurred in too many countries and capitals to recite.

If this is the fruit of a successful engagement with the Islamic world, what would a debacle look like? Rep. Paul Ryan said Sunday, “The Obama foreign policy is unraveling literally before our eyes on our TV screens.”