The War on Dads 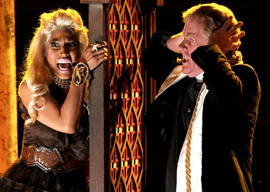 When Nicki Minaj flailed around satanically onstage in front of a scared fake priest at the Grammys last week, the Catholic Church was understandably upset. “Whether Minaj is possessed is surely an open question, but what is not in doubt is the irresponsibility of the Recording Academy,” Catholic League president Bill Donohue wrote. “Never would they allow an artist to insult Judaism or Islam.”

Donohue is right. Christians”but especially Catholics”are the last bastion of people you can comfortably offend. Piss Christ wins awards sponsored by the National Endowment of the Arts, but when Van Gogh’s great-grandson makes an arty film about Islam, he gets a rapier in his chest. Racism is even more sacrilegious. Can anyone even conceive of a Piss MLK winning awards? What about a Shit Oprah? I”m annoyed by the Get Out of Jail Free Card that Catholic-bashers and nonwhites get, but Minaj’s performance reminded me of an even less talked-about victim: dads.

“A man’s home used to be his castle. Today everyone sits around the castle laughing at TV’s court-jester dads.”

Insulting the American dad is more than acceptable; it’s viewed as laudable. Minaj wasn”t insulting her dad, because she doesn”t really have one. Minaj was mimicking Madonna’s relentless taunting of the Catholic Church. Madonna’s motive for her blasphemous imagery was a reaction to her oppressive Catholic father. I realize that saying Minaj’s bizarre performance made me feel bad about dads is a bit of a stretch, but I needed a segue. Plus, I”m a dad and our feelings are valid, goddamnit! We”re mad as hell and we”re not going to take it anymore!

When did saying, “Fuck you, dad” become a symbol of strength and independence? Why is depicting the American father as a retard a comedic mainstay? I”m not talking about deadbeat dads or all the self-indulgent boomers who trade in your mom for a younger model when her looks start fading. I”m talking about shoe salesmen such as Al Bundy in Married…With Children“men who stick by their family and are the only breadwinner in the house. He has stinky feet stuck in his face all day so his family can have a roof over their heads. Ha ha ha, what a nobody.

Homer Simpson isn”t simply dumb. He is less capable than someone with Down syndrome, but if the nuclear power plant he works at ever experiences a China Syndrome, he’s the only family member in danger. Ha ha, what a loser.

The Irish Catholic dad in Family Guy is equally useless, though he works in shipping at a brewery, one of the more dangerous jobs in America. Ha ha ha, he got crushed under a forklift while paying the bills. Black dads such as Bill Cosby tend to be a heartwarming combination of humor and wisdom, but if you went by American pop culture alone, you”d think us white dads lose all our brain cells when we ejaculate and as soon as we get our wives pregnant, we become the baby.