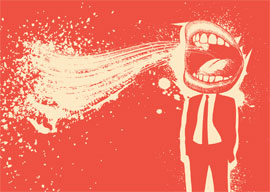 The discussion petered out over whether there was a need for some Minority Report-type precognitive powers to make the thing work, and I don’t recall anyone producing an actual estimate. In the spirit of math textbooks, I leave this as an exercise for the reader.

In speaking so frankly, Bloomie had forgotten the principal mission of a mayor in a major American city such as New York or Washington, DC: to hasten along the ethnic cleansing of troublesome, tax-eating, low-class blacks from the city to make room for docile, taxpaying, upscale whites and their Hispanic maids while distracting the cleansees by flaunting PC credentials.

For everyday flaunting purposes, just talking up the joys of diversity will do, though if the show trial of a Great White Defendant can be arranged, that’s a bonus.

The Abominable Word. The fuss about celebrity cheffe [sic] Paula Deen confessing to having spoken the word “nigger” stirs an uncomfortable awareness in me. I may as well get it off my chest.

Here’s the thing. When you stub your toe, bang your head on a low beam, or hit your thumb with a hammer, you utter an involuntary expletive”a word you would never think of using in polite company. It just comes flying out. Sometimes you emit a string of them, ungoverned by rules of sense or grammar.

Well, on occasions like that I sometimes say the Abominable Word. It doesn’t come out every time, nor even very often; but once in a while I’ll stub my toe and…“G**d*mn that f***ing n****r!” (I may as well asteriskize it here for full expletive effect.)

I can’t read much into this other than that I’ve completely internalized the word’s taboo quality. It’s just part of my stock of taboo words. Isn’t that what it’s supposed to be? So in this respect at least I am well-socialized, right? Good citizen, Derb!

Cussing is a very low-level mental function, the conscious mind not necessarily engaged at all. My mother spent a fair part of her nursing career in emergency rooms back when people rode motorcycles a lot and before crash-helmet laws. There were a lot of head injuries. She told me that when the brain was so badly damaged that no power of connected speech remained, people could still cuss and would do so all day long.

I can’t believe this is just me, although I wouldn’t mind some assurance on the point. And what comes out when a black person stubs his toe? “G**d*m that creepy-a** cr****r!” perhaps.