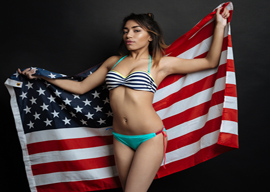 Hence the online Bikini Wars have already started. On the one hand you have Beth Knox, executive director of the Miss North Carolina Scholarship Pageant, saying that “a woman’s goals and aspirations are far more important than how she looks in a swimsuit.” On the other team you have Crystal Lee, Miss California 2014 and first runner-up for Miss America, saying, “Walking out in a bikini before a crowd cheering your name gave me a rush and sense of courage I never thought possible…. Letting contestants don the bikini was inherently feminist because women made that choice for themselves.”

(Intriguing historical aside: If the 2014 pageant had been conducted according to 1921 rules, Crystal would have received the Swimsuit Trophy for finishing second.)

Okay, so here’s my first question. Isn’t America the most fitness-oriented country in the world? The country that invented, among other things, aerobics, circuit training, the Gold’s Gym standard for body athletes, the Planet Fitness standard for “average Joes” taking care of their bodies, Jazzercise, personal training, health-insurance discounts for gym memberships, the spandex bodysuit, and the muscle-T selfie? We did not invent the bikini—that honor goes to France—but we definitely immortalized and perfected it and extended it to male swimwear, often in micro-bikini form. There’s a reason that every American fitness center has mirrors on every wall. There’s a reason that Arnold Schwarzenegger had to make his way to Southern California instead of trying to run his bodybuilding career from Graz, Austria. And that reason is that we’re all trying to get our bodies into better shape.

So what would be wrong—hypothetical question—with honoring American women who reach perfection or near perfection in this area? What would be wrong with following the Greek ideal of a healthy mind inside a healthy body? We probably don’t wanna go as far as the Greeks—the gymnasium was a place where you worked out totally nekkid—but we know from Plato and Socrates and Aristotle that they believed a healthy society cultivated both a disciplined mind and a beautiful fit body.

Those Greek perverts—just look at their sculpture! And they had to do all that toning the old-fashioned way, without any elliptical cross-trainers or Nautilus plate-loaded weight stacks.

One objection the body-shaming Puritans have to the swimsuit competition is that it’s weird for women to be “parading around” (again I’m quoting The New York Times, which increasingly seems to be written by grumpy spinster aunts) in bikinis while wearing high heels. And I happen to agree with this complaint, because wearing high heels in a body competition is a way to cheat on the calf work. I doubt if this would persuade any swimsuit model to give up heels anytime she has a chance to wear them—they simply make the legs look more toned—but to deal with the “parading around” part: That’s what a pageant is. It’s a parade. It’s a “look at me” event. (Not anymore, of course.)

And just one more quote from the Times before we leave them drowning in their own self-righteousness: “Officials at the Miss Universe Organization did not respond to multiple messages seeking comment on Tuesday about whether they would also end the swimsuit competition.”

Because apparently the Times reporters believe that, once the swimsuit is torched in America, the maillot de bain, the badeanzug, the mizugi, the traje de baño, and the kupalnik cannot be far behind. I half expect them to send an investigative team out to Coney Island this weekend and start calling out women in tankinis for spending too much time working on their glutes.

But I’m sure I’m wrong. I’m sure that ABC will have record ratings for the new bikini-less version of Miss America, even without all the leering grandmas who won’t like it anymore.

In the meantime, if you’d like to witness a pageant that fully embraces the bikini, they’re having one in Baltimore this fall. The defending titleholder, Shevon Cunningham, wears a bikini so tiny that it looks like skin. There are lots of things Shevon could talk about that Gretchen Carlson would love—experiences as a teenage immigrant from Jamaica, gratefulness for opportunities in this country, becoming a supervisor at Costco to help a tight-knit family, love of God, love of a home life in Far Rockaway, Queens—Shevon is pretty much a gold mine of “goals and aspirations.” But Shevon doesn’t talk about any of those things and wouldn’t expect to get credit for being generous, hardworking, family-oriented, or God-fearing. Shevon understands it’s a pageant. Shevon is Mister America, and he has a good time showing off his near-perfect body, and he doesn’t make self-important grandstanding claims about changing the world. What a boring guy. I’m surprised he’s not Greek.