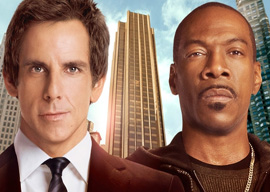 Instead, Ratner and Grazer kicked Murphy out of the lead. They had his role as the staff’s manager rewritten for Ben Stiller to play as a hard-working white ethnic from Astoria, rather like his lead in the hit Night at the Museum comedies.

Murphy was demoted to the petty thief that Stiller hires to teach him how to steal. It’s largely the same role Murphy had in 48 Hrs. and Trading Places almost 30 years ago, and he’s quite funny in it.

Some other cast members are even better, such as Gabourey Sidibe of Precious as the 300-pound Jamaican maid whose visa is running out and therefore is on the hunt for a husband. But not just any husband. With that self-assurance reserved for enormous black women, she knows she deserves the best.

The movie’s ethnic stereotyping is precise enough that the filmmakers worried about casting a mestizo Mexican-American actor with sensational timing (Michael Peña) as a mulatto Nuyorican elevator operator. So they explain that he’s one-fourth American Indian: “I’m the Puerto Rican Mohican!”

For the first hour, Tower Heist tries hard to be a better movie than it ought to be. It’s much less vulgar than you’d expect from a Brett Ratner film. Although the director is often compared to Michael Bay, there are no explosions in Tower Heist. Indeed, the opening acts offer a slow, sweet ensemble portrait of working-class travails. Audiences don’t want to pay money to see people like themselves. They wish to imagine living in Trump Tower, not working there.

Unfortunately, when the promised caper finally cranks up, Ratner and Grazer visibly run out of money. Several crucial scenes—or at least ones that would have made the finale intelligible—simply never made it to the screen.

Old Hollywood hands aren’t supposed to mess up like this. Perhaps Madoff wasn’t the only one with his hand in the till.