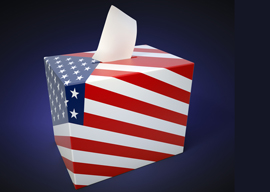 Perhaps the next month will prove me wrong on Romney, but so far he is putting the electorate to sleep. I believe him when he claims to favor free market approaches to the nation’s economic ills, but I don’t believe him when he rails against big government and central economic planning, because his record belies his words. He is, of course, the father of the individual mandate—a totalitarian giant leap forward for the welfare state. And he has stated that if elected and re-elected, he will borrow money every year he is in office until the last.

When he was interviewed with the president on “60 Minutes” last week, I purposely did not watch or listen to the show. The next morning, I read the transcript of the interview and thought many of Romney’s answers were articulate and rational. Then I watched the same interview on tape and was bored nearly to death. Romney cannot put a fire in people’s bellies. The only reason he gives for voting for him is that he is not Obama—a reason that appeals to just under half the country, but is not enough to seal the deal. He needs to recognize that his audience for victory is not his former neighbors in Boston, but Joe Sixpack in the heartland.

He supports all of Obama’s killings in the Middle East, but claims he wants to control events there with a more muscular foreign policy. He cannot justify that view, along with the fact that it has failed and put us close to bankruptcy, to an electorate weary of wars. He rips into Obama’s borrowing, but overlooks his running mate’s voting record in Congress, which authorized all of it. At first he vowed to repeal Obamacare saying it is unconstitutional, and then he said he wants to keep the parts he likes, even if they are unconstitutional.

Can anyone get excited about Romney? Aside from a capitalistic attitude about the economy—as opposed to the president’s love of central economic planning—does anyone know what views he will embrace on Inauguration Day? Do you know anyone just aching to vote for him, the way conservatives were for Ronald Reagan in 1980 and progressives were for Obama in 2008? I do not know of such a person.

What do we do? The president’s failures are legion and have made all of us the worse for them. Gov. Romney’s failures are obvious and will give us four more years of Obama. Who says the system is not fixed?