US and Catholicism in Crisis 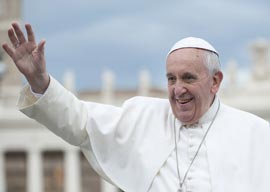 Yet one reads regularly of discussions inside the Vatican to alter what is infallible church teaching on these doctrines to make the church more appealing to those who have rejected them.

As the pope arrives in America, some Catholics are calling for an acceptance of contraception, the ordination of women and a new acceptance of homosexuality. Yet the Episcopalians, who have embraced all these “reforms” and more, appear to be going the way of James Fenimore Cooper’s Mohicans.

In Cuba, Pope Francis declined to address the repression of the Castro brothers. Will he also avoid America’s moral crisis to chatter on about income inequality and climate change and find common ground with Obama?

What has come out of the Vatican in the past two years is moral confusion. Yet as Philadelphia Archbishop Charles Chaput reminds us, “confusion is of the devil.” It is also trifling with schism.

Having emerged victorious in the 70-year ideological struggle against one of the greatest enemies that mankind has ever known, Marxism-Leninism, are the United States and the Catholic Church heading for the same desuetude and disintegration?