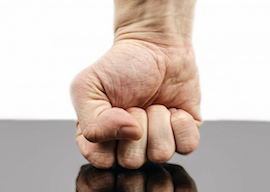 But despite the Alt-Lite’s vigorous repudiation of “Nazis””whatever the hell that term even means in 2017″the Antifanatics saw them ALL as Nazis and attacked. This is crucial to understand. If you disagree with these lunatics, you are a Nazi and deserve to be exterminated”just on, you know, the off chance that you might eventually exterminate someone someday. It doesn’t matter how you may try to distinguish your own beliefs from those of National Socialism in Germany during the 1930s”THEY decide who’s a Nazi and who isn’t. They aren’t interested in debate”they want the utter elimination of all dissent. And they have the tacit sympathy of the press, academia, and global finance. Whether they will still have the sympathy of the police under the Trump Administration is yet to be determined.

To my knowledge, neither Richard, Gavin, nor I has ever so much as recommended, much less committed, physical violence against those who merely disagree with us politically. To me that suggests that we are far more secure in our beliefs than anyone who wishes to silence (or punch) us for harboring diverse opinions. It also suggests that if they aren’t willing to have a debate and only want to assault, that is a declaration of war and they should be knocked back so hard that their eyeballs fly clear across the county line.

Due to the current legal and prevailing cultural climate”which dictates that any white person who doesn’t have a problem with being white is a Nazi who deserves being beaten in public”I would only suggest defensive violence, because the courts will not be kind to you.

But if you’re going to retaliate violently, do it with an exclamation point. Do it with the crushing finesse of the Belgian soccer hooligan who decked a fat leftist who wouldn’t get out of his face. Do it with the decisiveness of the highly outnumbered European traditionalists who mopped the floor with Antifa antagonists who foolishly thought they wouldn’t fight back last summer in Sacramento.