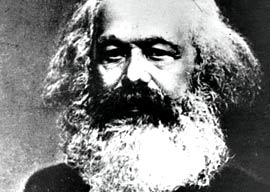 What is the worldly religion of the Jew? Huckstering. What is his worldly God? Money. … We recognize in Judaism, therefore, a general anti-social element of the present time, an element which through historical development “ to which in this harmful respect the Jews have zealously contributed “ has been brought to its present high level, at which it must necessarily begin to disintegrate. … The god of the Jews has become secularized and has become the god of the world. The bill of exchange is the real god of the Jew. His god is only an illusory bill of exchange. … Once society has succeeded in abolishing the empirical essence of Judaism “ huckstering and its preconditions “ the Jew will have become impossible….

There are several other citations attributed to Marx”as well as to Friedrich Engels, his benefactor and co-author of The Communist Manifesto“that would conclusively demonstrate to the handful of open-minded people who remain alive and unmuted in the Western world that he was at least as bigoted as, say, “Dog” the Bounty Hunter.

Marx’s battalions of blind apologists, yapping lapdogs that they are, will immediately scream that none of the above quotes detract from Marx’s general economic theories, that you can separate such isolated comments from the rest of his philosophy, and that he was merely a product of his time.

Fine. Then apply the same standards to Hitler and Robert E. Lee.

Whenever I hear someone say that the massively inhumane, soul-crushing, thought-murdering regimes that sprang from Marx’s philosophy didn’t represent “true” Marxism, the obvious rejoinder is that the Nazis and the Confederacy did not represent “true” ethnic nationalism.

Just as believing that wealth should be equitably distributed”a subjective notion if ever there was one”doesn’t mean you automatically will begin herding people into gulags, it is likewise true that disbelieving in the myth of innate human equality doesn’t instantly translate into a desire to start hanging people from trees and shoving them into ovens.

Ideas, no matter how misguided, should be allowed to roam freely. It’s humans who fuck them up. Ideas are separate from actions. Ideas do not automatically lead to harmful behavior. And attacking the character of a person who espouses ideas does not in any way discount his or her ideas. For the love of all that is holy and profane, I have no idea why any of this needs explaining, but apparently it can”t be explained enough.

So the minute you crazed and increasingly intolerant egalitotalitarians are willing to concede that ad-hominem attacks do not substitute for a legitimate argument, I”ll stop reminding you that Karl Marx said things that would send you all into a social-media Tweeting frenzy screaming for his blood. You lose the argument even by your own stupid rules. And the moment you show the guts and honesty to discuss ideas the right way”using “logic,” it’s a word you can look up in the dictionary”you”ll lose that argument, too.