We Are All Conspiracy Theorists Now 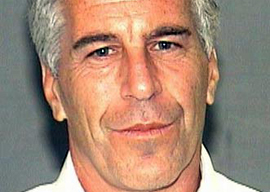 As the story goes, Jeffrey Epstein hanged himself with a jail bedsheet in the early morning hours of Saturday, August 10. Six days later, New York City’s medical examiner announced that the cause of death was suicide by hanging.
Problem is, nobody I know believes this. And according to a Rasmussen poll, only 29% of Americans believe the official story. A full 42% of them say they believe he was murdered. Of those who claim they’ve been following the case “very closely,” a robust 56% say they believe he was murdered.

Others say he’s alive and well, having been spirited away to safety by people who are so wealthy and powerful, you’ve never heard their names, that’s by design, and they like it that way.

The circumstances surrounding Epstein’s death form such a perfect storm of fuckups and unanswered questions, one may be forgiven for suspecting the Powers That Be are toying with us because they know there’s nothing we can do about it.

On July 23, Epstein was found unconscious in his cell and with marks around his neck. Although this was commonly depicted as a suicide attempt—and authorities promptly placed him on suicide watch—Epstein claimed he’d been assaulted by his cellmate, an impossibly muscular ex-cop named Nicholas Tartaglione, who was facing trial for murdering four people and burying them in his yard.

The very fact that such a high-profile inmate facing such serious charges and who had incriminating knowledge about extremely powerful public figures had a cellmate, much less a murderous musclehead, was suspicious.

Equally suspicious is the fact that a mere six days after being placed on suicide watch, Epstein was returned to the general population. According to Dr. Ziv Cohen, a psychiatrist who evaluates inmates at the Metropolitan Correctional Center where Epstein was being held, “Any case where someone had a proven or suspected serious suicide attempt, that would be unusual to within two to three weeks take them off suicide watch.”

According to the medical examiner’s report, Epstein had several broken bones in his neck, including the hyoid bone—which is far more commonly broken in cases of strangulation than in hangings. Epstein’s eyes were also bulging, which is also more typical of strangulation than asphyxiation.

“The circumstances surrounding Epstein’s death form such a perfect storm of fuckups and unanswered questions, one may be forgiven for suspecting the Powers That Be are toying with us because they know there’s nothing we can do about it.”

A comparison between photos of Epstein and his alleged corpse suggests the corpse has a differently shaped nose and earlobe.

The day before his alleged suicide, Epstein’s cellmate was moved to another facility, leaving him alone in his cell.

Two guards had been assigned to check on Epstein every 30 minutes. They apparently stopped doing this around 3:30AM on Saturday and didn’t return to his cell until they “discovered” his corpse at 6:30AM, although they allegedly made log entries lying about having routinely visited him. According to the official party line, they had both fallen asleep…for about three hours.

At first it was said that the cellblock’s cameras had malfunctioned, meaning there was no video of Epstein’s possible suicide. Later it was said there was video, but nothing was divulged about what the video did or didn’t show. It’s hard to know what to believe when the stories keep changing so quickly.

What we are commanded to believe—lest we be labeled paranoid conspiracy theorists and therefore domestic-terrorists-in-waiting—is that an absurdly wealthy convicted pedophile with a known penchant for wining and dining the rich and powerful at sex parties where every single move was videotaped and stored for blackmail purposes was allowed to kill himself less than three weeks after a previous alleged suicide attempt because he was taken off suicide watch with no explanation and left alone in his cell at a time when the cameras stopped working and the guards—both of them—conveniently fell asleep. And all this happened at a jail where there hadn’t been a suicide in over 40 years.

In the endless struggle between being paranoid and gullible, count me “paranoid” once more.

Much has been made of Epstein’s wealth—estimated at anywhere from $500 million to over $1 billion—specifically, what the hell he did to acquire it.

Until a flood of information rolls in to convince me otherwise, the most plausible explanation for his wealth and power is that he worked with intelligence sources to compile sexual blackmail information against the rich and powerful.

Alex Acosta was the Florida prosecutor who gave Epstein his absurdly lenient “sweetheart deal” back in 2008. Despite the fact that the FBI had identified 35 victims of sexual assault, many of them underage, Epstein walked away with 13 months in a county jail where he was allowed to leave his cell to go work in his office for 12 hours a day, six days a week. Under the deal, Epstein pled guilty to only one count of soliciting prostitution and was promised that neither he nor any potential conspirators would be tried on any of the other potential charges.

In 2017, when Acosta was being grilled as Donald Trump’s inevitable labor secretary, Acosta was asked whether the Epstein case would be a problem for him. Acosta said he cut the deal because he’d been asked to “back off” and that Epstein was above his pay grade:

I was told Epstein belonged to intelligence and to leave it alone.

OK, but which intelligence agency? In a puzzle that gets weirder with each new piece, US Attorney General William Barr has expressed outrage and suspicion regarding Epstein’s alleged suicide. But his father Donald Barr worked for the Office of Strategic Services—a predecessor to the CIA—and hired a young high-school dropout named Jeffrey Epstein to teach at the Dalton School. Around the same time he’d hired Epstein, Barr wrote a sci-fi novel about sexual slavery.

The very fact that Epstein potentially had mountains of incriminating evidence about Bill Clinton—who logged over two dozen flights on Epstein’s “Lolita Express”—suggests that he was not working for any intelligence agency that was friendly to the US, seeing as how the US intelligence community seems overly protective of Bill Clinton and that horrid woman who pretends to be his wife.

So does the suggestion that Epstein was in any way friendly with British intelligence, seeing as how Epstein appears to have possessed incriminating evidence of Prince Andrew cavorting with underage girls under the watchful eyes of Epstein and his former girlfriend/reputed pimp, Ghislaine Maxwell.

Maxwell appears to be a hugely inconvenient piece of the puzzle here. Multiple witnesses have claimed that not only was she the primary procurer of underage flesh for Epstein, she also allegedly participated in raping and sexually humiliating the girls.

Her father, media mogul Robert Maxwell, died of an alleged “suicide” in the middle of the Atlantic Ocean in 1991. As the story goes, he fell off his luxury yacht, which he named Lady Ghislaine. As other stories go, he was intimately connected with Israel’s Mossad agency and had threatened to divulge their secrets if they didn’t help him dig himself out of debt. Most interestingly, after Maxwell’s alleged suicide, he was given a state funeral in Israel attended by six serving and former heads of Israeli intelligence. “He has done more for Israel than can today be said,” eulogized Prime Minister Yitzhak Shamir cryptically.

Maxwell had allegedly been instrumental in installing a Mossad-designed trapdoor in malware that was distributed across government agencies worldwide, allowing Israel to spy on even its “greatest ally.”

Epstein was also a lifelong friend and sometime business partner of Israel Prime Minister Ehud Barak, whose ties to the Israeli intelligence community are deep and undeniable.

So if Epstein had ties to an intelligence group, it was most likely Mossad. And the only valuable “intelligence” he could provide them came in the form of sexual blackmail. This would be nothing new in American history, seeing as how Jewish mobsters such as Lewis Rosensteil hosted “blackmail parties” for the rich and powerful in the 1950s featuring boy prostitutes in rooms that were wired for audio. Meyer Lansky, the only major American mob boss to die of old age without ever having done a day in jail, reputedly kept FBI chief J. Edgar Hoover at bay for decades with the threat of releasing photos of Hoover engaged in homosexual activity.

And then there’s the uber-creepy painting of Bill Clinton in a blue dress that Epstein kept in his Manhattan mansion for yuks.
The American public is stupid, but they aren’t that stupid. With Epstein’s alleged suicide, it’s not that some things don’t add up—nothing adds up except the increasingly maddening feeling that we’re being brazenly lied to and there’s nothing we can do to change it.