We Are All Charles Manson Now 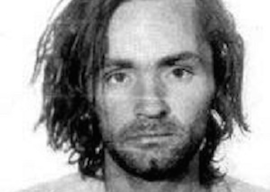 But according to Manson family member Bobby Beausoleil—who had been arrested for the murder of Gary Hinman in July 1969 and who’d tried to frame black revolutionaries by smearing the words “POLITICAL PIGGY” and a Black Panther-styled paw in Hinman’s blood on the walls—the Tate/LaBianca murders had nothing to do with trying to spark a race war and everything to do with pulling off a couple of copycat murders that would lead police to believe the killers were still at large and result in Beausoleil’s release.

Others point to the fact that Manson modified the “X” he’d carved into his forehead for his trial into a swastika—and later a swastika tattoo—as evidence that he was never a hippie and never could have possibly been the toxic afterbirth of the tumultuous 1960s.

Obviously few, if any, of these people have been to prison, especially in California. In places such as Folsom and San Quentin, white inmates who don’t immediately clique up with the Aryan Brotherhood don’t wind up living very long, because if the White Power inmates don’t kill them, the Black Power and Brown Power ones certainly will—or at the very least, turn them out as lifetime sex slaves.

Manson was indeed a product of the 1960s, but more than anything he was the product of a teenaged alcoholic mother/prostitute and the doomed path such a bedraggled spawning set him on. By the time of the Tate/LaBianca murders, Manson had already spent half of his life in correctional facilities of one sort or another. And if he developed negative attitudes toward blacks, it likely had far less to do with reading George Lincoln Rockwell and far more to do with being forced to interact with blacks behind bars during his formative years. He was not nearly as naive about race as so many who’d condemn him for being a “racist” are.

MLK was murdered a year before the Manson Family murders. Riots had sprung up all across the USA. As a street hustler and lifetime con, Manson had the survival instincts that so very few pampered modern leftist scribes will ever have. If he foresaw an inevitable race war in America, maybe he was nothing more than a hillbilly Bob Dylan and saw it blowin’ in the wind.

If Manson was truly prophetic about anything, though, it was why whites would lose a theoretical race war. According to Manson, when blacks came seeking blood vengeance, whites would be too hopelessly split between those with self-preservation instincts—those who are now defamed as “racists”—and the uptight, sheltered squares who thought it would be “racist” not to let black people start killing them en masse.

And it is perhaps in that sense alone, that the hugest brewing war in America is not interracial, but intra-racial—Goodwhites v. Badwhites—that Charles Manson and the Alt-Right saw eye-to-eye.

The modern sheltered left is so abjectly clueless, they fail to realize they are the primary instigators of this conceivably inevitable conflict.