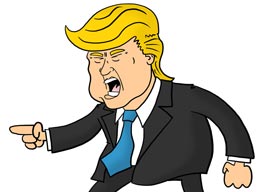 After decades of bitterly partisan acrimony, a consensus has been forged. Americans on all sides of the political compass finally agree on something: Donald Trump is a “fascist.”

And they say our country is too divided politically to see eye to eye on anything.

Liberals, who are more apt to liken someone they disagree with to Hitler than any other group, get their rocks off pinning the fascist label on Trump. The Week‘s Ryan Cooper is the biggest perpetrator of this linguistic stratagem. He’s written numerous articles on why Trump is a fascist threat to the nation. Democratic presidential hopeful Martin O”Malley is also fond of calling the Donald the F-word.

Fascist-mongering is not exclusive to the left. A national security advisor for illegal-alien-loving Jeb! Bush is guilty of the verbal slander. One of Ohio governor John Kasich’s super PACs is subtly linking Trump to fascism by comparing him to Nazi Germany. Marco Rubio’s war cheerleader Max Boot called Trump a fascist while admitting it’s not a term he “uses loosely or often.” Libertarian writer Jeffrey Tucker says that Trump’s ideology “is best described as fascism.”

“The critics are right, Donald Trump’s campaign is based upon fascist principles. But here’s the thing: What campaign isn”t?”

With all this fashy talk, one might get the idea that the two sides of the political establishment are working in cahoots to take down the candidate who best represents all those Middle American Radicals. You might also think that Donald Trump is an anomaly”that his creeping fascistic style is new to American politics.

But what does “fascism” even mean? The way commentators toss around the word, you”d think it came with a precise definition. And you”d think that Mr. Trump embodies that definition in his unpredictable, fuck-you-style campaign.

But, of course, you”d be wrong to assume such veracity on the part of the media. The problem with the word “fascism” is that it’s used so much it has lost all meaning. Basically, pundits use “fascism” to describe anything or anyone who goes against their ideology. With Donald Trump rampaging Godzilla-like through all the political establishment’s sacred idols”political correctness, porous borders, the aversion to criticizing any race or religion besides white Christians”it only makes sense that he’s been attacked as an Ã¼berfascist.

In the mid”20th century, fascism actually meant something. The Old Right journalist John T. Flynn described the governing philosophy as a capricious, power-mongering dictatorship. “First we must note one important difference between Communism and Fascism which becomes clear here,” he wrote. While socialists and communists had a “definite philosophy,” fascists, on the other hand, “improvised as the movement went along.” Citing Benito Mussolini’s governing style in Italy, Flynn deduced the “essential ingredients of fascism.” They include a government unrestrained by constitutional limits, a dictator who makes it his job to lead the nation to full vitality, an economy that is overseen by a vast bureaucracy, and a society that is highly militaristic and dependent on an imperialist complex.

Gee, don”t those all sound eerily similar to the federal gargantuan we call Washington today?

Certainly, Donald Trump is running on a fascist campaign platform. He’s using the sheer power of his celebrity to drown out all opposition. He talks about using the Oval Office as a tool to get the country winning again, and not as a solemn duty. Plus, he boasts recklessly about bombing the shit out of our enemies.

The critics are right, Donald Trump’s campaign is based upon fascist principles. But here’s the thing: What campaign isn”t?

Former first lady, senator, and secretary of state Hillary Clinton is running for president based solely on her personality and connections to the country’s elite. She wants the government to play an even larger role in people’s personal lives than it does now. In a recent debate she declared, “The American president has to both keep our families safe and make the economy grow in a way that helps everyone”not just those at the top.” Control freak, much?

Florida senator Marco Rubio is no different. The boy wonder has based his entire campaign on a muscular foreign policy and his reputation as a great communicator. He has his own plan to create an “economic renaissance in America.” And he speaks glowingly about restoring America’s leadership in the world.