What’s So Bad About Discrimination? 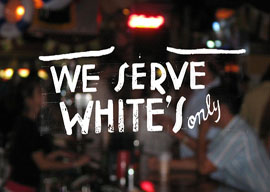 These statements hardly parallel the evolved, civil, and progressive values those on the left pretend to cherish. Now there’s a rally planned for Saturday afternoon. Various idiots will march in a circle, protesting the bar owner and insisting that “there is NO PLACE FOR RACISM in the city of Raleigh.” And then what happens?

Should the Raleigh Police Department stampede into the bar like a micro-Waco? Should they search for evidence of racism and then shut the bar down through government force when they find no portraits of Malcolm X hanging above the bathroom stalls?

It’s sickening that Raleigh’s residents refuse to acknowledge even the simplest aspect of private property. Let’s be clear: No one has a right to enter Chriscoe’s business in the first place. If he asks you to leave, then leave. Whether it’s because you”re black, because you”re wearing stupid sandals, or for no reason at all, what the owner says goes.

Our problem today is that people are beginning to think of businesses as public goods. Any action opposing this collectivist illusion is ultimately followed with lawsuits.

The obscene disappearance of male space (e.g., social clubs, barbershops) is linked to businessmen’s fear of being prosecuted for providing an environment to customers who want to spend time with others like them. One of the most notable examples is McSorley’s Old Ale House in the East Village, an Irish tavern whose motto used to be “Good Ale, Raw Onions and No Ladies” until the feminist maggots forcibly opened its doors to women in 1970.

Walter Block explains it best in Defending the Undefendable:

Would Wall oppose an enterprise catering to an all-black customer base?

Unfortunately the government won”t stop enforcing this madness until entrepreneurs take a stand and say, “No.” Passive aggression works in the short term but will not outlast the progressives” incessant barges into our lives. Will this civil disobedience ever happen? We may not know until it does. One thing is certain: The longer politicians force people together, the harder people will push against the grain. And the harder they push, the harder this delicate society will crash on the ground into pieces.