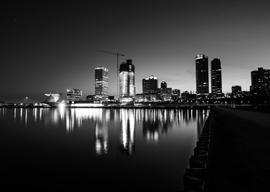 Nor are the troubles of blacks in Wisconsin confined to Milwaukee. The degree of racial inequality in the liberal state capital of Madison is striking. In Madison’s Dane County, which Obama carried with 71 percent of the vote in 2012, “three-quarters of the county’s African-American children live in poverty, compared to 5 percent of white children.” Dane may have the biggest gap in quality of life between whites and blacks of any county in America. (In general, large black communities tend to do slightly better in conservative states like Georgia and Texas.)

Keep in mind that Wisconsin has been one of the most reform-friendly states over the past century. Wisconsin’s famous Robert “Fighting Bob” La Follette Sr. was governor or senator from 1901 to 1925. In the 1924 presidential election he won 17 percent of the national vote on the Progressive third-party ticket.

Wisconsin is where European social democracy came closest to happening in America. But it’s also where the welfare state and African-Americans interacted most disastrously.

In his 1895 “Cast down your buckets where you are” speech, black leader Booker T. Washington famously called for American industrialists to hire black Americans rather than white immigrants.

For two decades, Northern factory owners paid little attention to Washington’s plea for patriotic solidarity. But World War I and the immigration restriction laws passed by Congress in 1921 and 1924 set off a golden age of black advancement as the most industrious Southern blacks traded in cotton picking in the South for a better life of assembly-line work in the North.

For a half century this worked rather well, until liberal overconfidence led to increased welfare in Northern states in the 1960s. This attracted less enterprising Southern blacks and encouraged Northern black families to revert back to African domestic patterns in which the women provide for the children and the men don”t work.

Initially, Wisconsin lagged behind Illinois in boosting Aid for Families with Dependent Children handouts. In 1970, Wisconsin paid only the national average of $184 per month per family of three, while Chicago lavished $232 on welfare mothers. But both were a lot more attractive than the $56 paid by the state of Mississippi.

During the 1970s, however, Chicago’s cynical Irish Democratic political leadership grew tired of attracting the laziest people in Mississippi and boosted AFDC payments to only $342 by 1985. In contrast, the more idealistic politicians of Wisconsin”during the McGovern era, the state was led by a formidable trio of liberal Democrats, Governor Patrick Lucey and Senators William Proxmire and Gaylord Nelson“raised welfare to $533. This generosity with the taxpayers” money sucked in the dregs of Mississippi.

Combined with the state’s industry being outsourced to China, this heritage has left even the more diligent Wisconsin blacks with little legal work to do.

Wisconsin’s disastrous 1970s experiment with naive liberalism hasn”t been repeated. Over the past three decades, Wisconsin has been a pioneer in Republican-led reform of welfare and public schools under talented politicians such as Tommy Thompson, Paul Ryan, and Scott Walker. But they haven”t been able to fully rectify 1970s mistakes.

One lesson to be learned from Wisconsin’s sorry history is that poor selection of newcomers can have negative ramifications for generations. We like to hope that migrants will assimilate to our higher standards, but it often turns out that they just drag us down to theirs.

Thus, in 2016, Milwaukee is still being looted and burned by the grandchildren of the welfare mothers attracted to the city by the liberal misconception of the 1970s. Wisconsin’s disillusioning history with migrants might well have implications for national immigration policy in 2016.