When the Rainbow Goes Over the Cliff 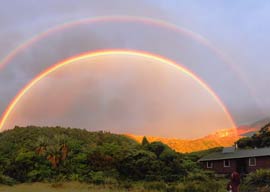 From outward appearances, the four little black kids singing a song called “We Are Provided For” seemed happy. Along with two other Children of Color, they had been adopted by a married white lesbian couple named Sarah and Jennifer Hart. This odd menagerie consisted of three siblings adopted from one family and three from another, and along with their sexually atypical moms, they constituted a progressive Brady Bunch who presented a grinning face to the world.

Sarah and Jennifer had adopted their first trio of nonwhite siblings in 2006 and received training in intangibles such as “racial diversity excitement” and “helping abused kids in care heal.” A social worker in Minnesota would write that “The Hart family takes every opportunity to celebrate the children’s ethnic heritage” and “whole heartily [sic]” recommended that they be permitted to adopt a second trio of nonwhite children that were not their own blood and never truly would be due to the fact that the moms were white lesbians.

In 2014 the family gained worldwide notoriety when a frightened-looking Devonte Hart, who’d been toting a FREE HUGS sign at a Portland protest against the acquittal of the officer who shot Michael Brown in Ferguson, MO, was photographed with tears streaming down his face as he hugged a white cop. Social media photos of the children showed them smiling widely and carrying LOVE IS ALWAYS BEAUTIFUL signs. To the outside world, the only hint that all was not as it seemed was an observer’s comment that it seemed the moms would “parade” the children around in public without showing them much affection.

Then came the murmurs of abuse, which seemed to trail the family wherever they moved—and they moved often.

While the Harts were living in Minnesota, state officials received six separate reports of abuse or neglect and found that two of them were legitimate.

In one instance, a child told an adult that Jennifer Hart had bruised her arm, but the state determined that the girl had fallen instead. Another allegation involved slamming six-year-old Abigail’s head against the wall. According to an investigator, “the children talked about not getting supper, getting sent to bed without food, being made to stay in bed all day, or stand in the corner for a long time.” But when Abigail Hart told a school official that her mommy had given her “owies” and presented with bruises all over her body, Sarah Hart pled guilty to misdemeanor domestic assault. The beating had started after Sarah found Abigail with a penny in her pocket and accused her of lying about where she had found it. According to court documents, Sarah had gotten “out of control” with the beating. But rather than having her children seized and sent to jail as would have certainly occurred with a straight white male, the couple only received in-home therapy and training in “skill building activities” because everyone knows that while men are evil, women do bad things because they have emotional problems.

“Whereas the propaganda shows smiles and rainbows, the reality is a pile of smashed corpses at the bottom of a cliff.”

When the family moved to Oregon, reports of abuse followed them. Investigators who interviewed friends of the Harts were told that the children were required to raise their hands before speaking, would get in trouble for laughing at the dinner table, and were forbidden from wishing their brother Markis a happy birthday on his birthday. Officials also received calls that the children appeared to be malnourished. In one incident after the children ate more pizza than they’d been commanded to eat, they were forced to lie on their beds for five straight hours.

Things unspooled even more wildly after they relocated to Washington State in 2017. Neighbors said that Hannah Hart once rang their doorbell at 1:30 AM, missing two teeth and appearing very thin. She said she’d escaped the family’s house by jumping out of the second-story window and begged the neighbors to take her to Seattle.

In March of 2018, Devonte Hart—the child who was famous for a photo that showed him hugging a white cop while crying—begged neighbors for food, alleging that his parents withheld food as a form of punishment.

On March 26, 2018, social workers knocked on the door of the Hart family house.

There was no one home.

Three days later, the Harts drove themselves and their six children over a 100-foot cliff in Mendocino County, CA. All of the bodies except Devonte’s have been recovered.

A special jury recently ruled that this was no accident.

Jennifer Hart, driver of the SUV that plunged the Rainbow Brady Bunch to their deaths, had a blood-alcohol level over the legal limit. Sarah Hart had 42 doses of generic Benadryl in her system. The children whom coroners examined all had Benadryl in their system; at least one had been given 19 doses.

While riding in their Death Mobile, Sarah Hart had conducted the following Internet searches:

How easily can I overdose on over the counter medications?

How long does it take to die from hypothermia while drowning in a car?

According to authorities, one of Sarah Hart’s final searches was for a no-kill dog shelter.

Chew on that for a minute—while in the process of killing herself and her six adopted children, Sarah Hart was worried about keeping the family’s dogs alive.

According to Lt. Shannon Barney of the Mendocino County Sheriff’s Office:

In my opinion, Sarah and Jennifer succumbed to a lot of pressure. They got to the point where they made a conscious decision to end their lives and take their children with them.

From what I’ve read, only one of the two women worked, and at low-paying job for a Kohl’s department store. They also received approximately $2,000 monthly in governmental “adoption assistance.”

From what I can determine, the only legitimate “pressure” to which these women finally “succumbed” was that authorities were once again breathing down their necks for beating and starving their children.

They both decided that this was going to be the end. That if they can’t have their kids that nobody was going to have those kids.

Pardon me for thinking that this sounds intensely self-centered of these two homicidal dykes. And I beg you to forgive me yet again for suspecting that their adoption of a half-dozen black kids had nothing to do with the black kids and everything to do with posturing as righteous progressives.

This gruesome tragedy can be seen as a metaphor of multiculturalism at large. Whereas the propaganda shows smiles and rainbows, the reality is a pile of smashed corpses at the bottom of a cliff.