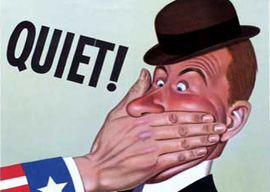 This is not an accident, but something inherent in modern democratic ideology. I am not including older democratic models such as the one that Orbán is trying to revive in Hungary or which Swiss or American communities once practiced. I am talking about our notion of “democracy as a way of life,” which may be as totalitarian as what the communists attempted but is also more successfully liberticidal. Contrary to our self-congratulatory bromides, modern democracy is neither in favor of true diversity nor particularly peace-loving.

This was brought home to me dramatically in 2003, when on my return from an anti-discrimination “learning session” at a nearby college—a measure that both state and federal authorities required—I learned that we Americans and our British fellow-democrats had just invaded Iraq to bestow on its inhabitants the blessings of democracy and human rights. Although I would have been delighted to hear something else at the time—for example, that our governing class had been reduced to its pre-New Deal size—this was and is impossible. We now enjoy government social engineering coming through the woodwork and wars of national liberation modeled on Bolshevism.

I do not see these features as a distortion of our democratic system but as fully compatible with democracy’s emphasis on universal rights, equality, and in recent decades, the grand project of modernizing the rest of the world with what Allan Bloom in The Closing of the American Mind praised as “democratic education.”

In the US, older institutions and traditions have prevented this development from producing more harm. The American Constitution was a pre-democratic eighteenth-century exercise in what James Madison called “the physics of government.” It was an ideologically neutral governing document which allowed for a high degree of decentralized power. Those who today insist on strict adherence to this document are actually (to their credit) antidemocrats. Whether or not they know it, they are standing athwart further efforts by democratic state power to extend its already meddlesome reach.

Appeals to universal rights are also a thoroughly democratic practice which arose in the eighteenth century and was used to justify the French revolutionary state’s aggressions. Much to neoconservatives’ regret, Americans after their Revolution ceased paying attention to the decorative phrases about natural rights that Jefferson stuck into our Declaration of Independence (much to the displeasure of many Continental Congress delegates). Therefore it was supposedly a good thing that Lincoln reactivated this universal-rights phraseology during the horrors of the American Civil War. Indeed, we are true to our democratic character by forcing our human rights and political peculiarities on those living in different cultures. And we are morally required to aggressively bring them our state-of-the-art democracy.

The end effect of modern democracy, as Kenneth Minogue observes in The Servile Mind and as I try to show in After Liberalism, is growing submissiveness to the state as a source of both financial support and imposed morality. Democratic regimes do not encourage individuality as much as they socialize their subjects. This priority becomes established and accepted as older centers of authority are weakened and the overriding goal of overcoming inequality and discrimination takes center stage. Although this egalitarian goal can never be reached, the endless journey toward it becomes democratic government’s justification for existing. Compensatory justice for once-scorned minorities is not a departure from the egalitarian ideal but is instead its perfect expression.

Democratic populists argue that the people are being ignored or that the elites are out of touch with them. But most voters seem to like what the system offers and are not hunting for reactionary, antidemocratic options. These citizens fully understand that democracy means the promotion of equality at home and abroad. They believe that such schemes as redistributing income, overcoming discrimination, and forcibly implementing “human rights” in our foreign policy are democratic ideals.

Outside the circles of reactionaries among whom I travel, I have yet to run into people who oppose democracy or equality or who question this ideological consensus. Those who don’t belong to this consensus should not blame politicians. They should indict democracy itself.