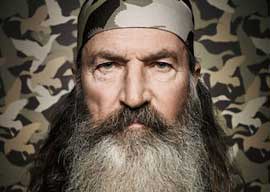 It makes sense that down in the despised South, where whites and blacks have lived alongside one another in greater numbers for far longer than they have anywhere else in the USA, they’d have developed enough shared cultural pathways that they get along more smoothly than anywhere else in the USA. It also makes sense that snooty cosmopolites who view everything between New York and LA as “flyover country” would have a distorted, fearful, and, yes, bigoted view of Southern culture.

This superficially ridiculous yet culturally deep-reaching saga was blown into the Story of the Week by a numerically tiny yet massively powerful special-interest group, and no, I’m not talking about Jews, at least not this time. Perhaps the gay lobby now outranks the race hustlers in terms of media power. But in attempting to silence Phil Robertson, these ideologically intolerant peen-slurpers are also dishonoring the opinions of the 45% or so of Americans who agree with him that homosexual behavior is sinful.

What happened to the art of simple, cordial disagreement? Maybe I have a head injury, but I seem to recall a time somewhere in the 1970s and 1980s where people didn’t freak the fuck out and scream for blood over simple ideological disagreements. This was a blissfully quiescent era right after Red Scare paranoia had peaked and just before PC totalitarianism began its ever-strengthening chokehold on the culture.

Though many of the duck-hating dick-lovers would likely claim they”re atheists, what we have here is a basic sandbox dispute between competing religions”traditional Christianity versus Cultural Marxism. Religions are, by their very nature, intolerant of one another.

But at least for the Christmas season, can you all call a truce? You can continue to call each other bigots and sinners”it all pretty much means the same thing, depending on which of the two religions you choose. But can’t you all share some eggnog and have a good laugh about the fact that homosexual behavior has been observed among ducks in the animal kingdom, and whether or not that’s sinful, it’s at least funny?

Gosh, I sure hope so. I dream of a day when hearts and anuses start healing all across America.

My fellow Americans, why do we scream at each other? This is what it sounds like when ducks cry.