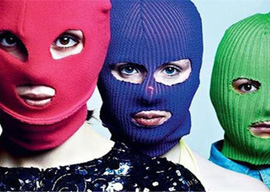 Feminism has been called “the radical notion that women are human beings,” but in its latter-day extremist incarnations it more resembles the religious fiction that women are innocent angels. It’s notable that Pussy Riot beseeched the Virgin Mary”a matriarch if ever there was one”to help them shame the patriarch of the Russian Orthodox church for his political endorsement of the hyper-macho Putin, a martial-arts expert who rides motorcycles, race cars, military fighter jets, and submarines when he isn”t scuba-diving, playing ice hockey, or shooting darts at whales.

Punk rock, at least in its original manifestations, seemed innately nihilistic and iconoclastic before it morphed and ultimately ossified into a blind puppet of Cultural Marxist platitudes and began propping up everything once deemed profane (heroin addiction, slovenliness, foul language, and, um, “alternative sexuality”) as almost saintly virtues. Over the years, the slogan “Sid Vicious Died for Your Sins” seems less and less ironic. Without seeing a particle of irony, many of Pussy Riot’s supporters are calling their prosecution “outrageous,” “offensive,” and even “blasphemous.” One British scribe went so far as to claim that “a pussy riot is an absolute moral necessity.”

Predictably, neither side wants to be guilty of “hate” in all this, to which I say, “Poppycock, balderdash, and fiddlesticks!” Everyone hates, whether they admit it or not. It’s time to decriminalize and demystify what is a natural and universal human emotion. There’s nothing wrong with hating anything that threatens your well-being and sense of self.

I see both sides” fevered hatred as a response to disillusionment and a sort of primal panic at having no tangible solutions. After the unparalleled mind-crushing totalitarianism of the Soviets, many Russians feel their government has betrayed them yet again. Beneath the superficial sparring about who’s holy and who’s a sinner is a frantic power struggle over how society should be managed.

But I”ve never been to Russia, so I asked a friend in Moscow for his thoughts. He says the public now generally sees Putin as a king rather than a president and that the country is slipping back into feudalism. He says no one under seventy years old wants a return to communism but that many people are uncomfortable with what appears to be an emerging fusion of church and state. He says that most women support Pussy Riot but most men don”t, claiming that his wisest male friend has scrutinized all the information and concluded that the group is being used as tools for Western globalist forces that are hostile to Russian nationalism.

He agrees with me that most revolutionaries are fantastic at destroying things but haven”t a clue as to how they”d rebuild them.

Still, he insists that the people want change, and in Russia change never comes without violence.

“All the people here have no hope,” he says, “but still they vote for power. In Russia, we have a proverb: You can”t understand Russia with your mind, you can only believe in it. It’s so huge that people get lost, it is fucking wide and so different and so empty. It is like the universe and if you want to manage it, you need to be a fucking sadist.”

So when change comes, it likely won”t be the answer, but at least it will be an answer.

UPDATE, 8/17/2012: The three members of Pussy Riot have been found guilty of hooliganism and have each received sentences of two years.