Where the Men Are 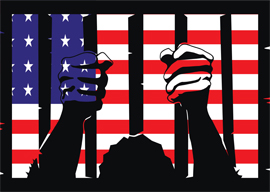 Black women in any case seem to give it up more easily than nonblacks. “Nearly half (48%) of non-Hispanic black teen girls get pregnant at least once before age 20″nearly twice the national average.”

That said, it’s not just a black thing. Meet Montana State inmate Michael Allen Murphy, as white as you please, and irresistibly pleasing to some subset of females up there in the Treasure State. At any rate, Murphy persuaded several female prison officers to fellate him. He even seduced the house psychiatrist. (Physician, heal thyself.)

What’s going on here? The manosphere has an answer. Women are no longer dependent on men for support. Liberated from this bondage, they flock to alpha males”those gifted with the pickup arts. Humdrum good-provider beta males and clueless, lovelorn omegas are left out in the cold. Here’s the Lion of the Manosphere:

[H]ow alpha was Tavon?…On the streets, who knows for certain what quality of women he could get, but given his proven skill at seducing female prison guards to do his bidding, it’s a good bet he was probably pulling better quality outside than his available selection within prison…[But] even if Tavon was boffing ugly women, that’s still thirteen ugly women who decided to pass on loving, intimate relationships with omega or even lesser beta freemen for illicit harem duty with an attempted murderer in jail…[P]oor omegas and betas…they’re not just competing with free alphas, they’re competing with alphas ostensibly removed from societal circulation.

The tendency of women in this regard is surely not news. Lord Byron was “Mad, bad and dangerous to know,” thereby owning two of the three adjectives traditionally used to describe prison inmates: “the sad, the bad, and the mad.” Carmen went for the swaggering bullfighter, breaking the heart of poor beta JosÃ©. TannhÃ¤user‘s confession that he’s been frolicking in the Palace of Love just makes Elisabeth even steamier under the silk, leaving poor beta Wolfgang plucking forlornly at his harp. Chicks dig jerks.

Out at the tail of the distribution are chicks who dig psychopaths. Bonnie thought the world of Clyde. Scott Peterson, after murdering his wife, was swamped with marriage proposals. Now we hear that the surviving Boston bomber has a female fan club. Shrinks have a word for it: hybristophilia.

Speaking as a beta provider with zero inclination to criminality, I find it all depressing. Would I have had a richer, more fulfilling life as a jerk? Possibly: but hey, at least I’m not in jail.