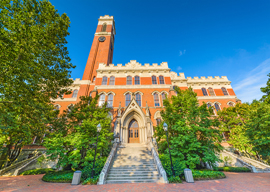 I mention these two courses”I hated one and dropped the other”because they happen to be the only two courses I took during my four years at Vanderbilt that could have possibly led to gainful employment. Soviet analysts weren”t that common at the time. Russian-speakers in America were rare. But no one told me, “Stay in political science, there’s money to be made!“

Instead I ended up with a degree in English literature and classical studies, primarily Latin. Obviously my college was failing to tell me the truth about the viability of translating Catullus for a living.

Additional evidence that I was consistently lied to and programmed for failure:

(1) I was never informed that the 18th century is meaningless. Therefore I wasted hundreds of hours reading Alexander Pope, Samuel Pepys, Jonathan Swift, Addison & Steele, and the dreaded Shaftesbury. I was stunned when, at my interview for a clerical position at IBM, I was stopped after reciting only two lines:

They could have simply informed me right from the beginning: No one likes Alexander Pope. He’s like a bad pop song you can”t get out of your head. I”m sure that Alexander Pope didn”t even like himself.

(2) The ability to speak Middle English with the proper accents and vowel sounds has a limited effect on Department of Human Resources algorithms, even when the HR guy knows Chaucer.

(3) Dr. Weatherby was wrong and mean-spirited when he took five points off my grade for using the word “lifestyle” in a paper on “My Last Duchess,” going on in the margins about how this sort of contemporary compound semiliterate jargon is all too frequent among lazy undergraduates. I can prove he was wrong: Ultimately one of the many low-paying jobs I did land was working for the “Lifestyle” section of a newspaper.

(4) Cardinal Newman, Tractarianism, and the Oxford Movement, stultifying in their power to turn football weekends into a series of 15-minute naps as you try to fight your way through Apologia Pro Vita Sua, are topics that brand you as an unhireable nutcase when introduced into any conversation.

(5) The Vanderbilt English professors were all descended from a tradition called the New Criticism, whose first principle involved textual analysis without regard for history or biographical context. This is a recipe for social and professional disaster when entering the age of political correctness. I was never told that expressing admiration for Ezra Pound’s “Cantos,” without also condemning him as a fascist propagandist, or giving a positive opinion about Allen Tate’s “Ode to the Confederate Dead,” without also talking about what a horrible racist he was, are positions that lead straight to a freelance career.

(6) No one cares about Gerard Manley Hopkins or “The Windhover.”

(7) No one cares about “Dover Beach,” even people who live near Dover Beach.

(8) German literature sucks, especially in translation, and has no employment value even for people moving to Dresden.

I could go on, but I”ll leave it there. Obviously no one at Vanderbilt had the slightest regard for my future. Fortunately I had a scholarship sponsored by the Thoroughbred Racing Association, and horse breeders don”t care about being repaid, so there was no crushing student-loan debt. But the school was obviously in violation of the Gainful Employment Rule and should have all its federal incentives revoked.

I remember this guy who used to come to the romantic-poetry seminar”Wordsworth, Byron, Coleridge, Shelley, Keats, twice a week, eight people around a table”and he was from eastern Kentucky, wearing homemade shirts, with a drawl so thick you needed a chain saw to cut it down to a mere twang. He never spoke unless he had to. Then he would say something really brief and really simple like “If you look at the meter in line 3, it’s a death meter.” And, despite the drawl, he could read Wordsworth like a son of a bitch.

I can”t help thinking that the Gainful Employment Rule is designed for guys like that, with bureaucrats assuming that, because they grew up barefoot on dirt floors in Appalachia, they need somebody to tell them what to do with their life. But this guy didn”t care what the federal government wanted for his life. He wanted to sit in the goddamn romantic-poetry seminar and parse Shelley.

And that’s the fatal flaw in the arrogant government move against ITT Tech. Everybody going there chose to roll the dice and go with the career they loved. It doesn”t matter if the major has “no job opportunities.” Maybe that’s not why they”re going to college. And even if it is, I might be the exception.

With apologies to Dr. Weatherby, all those ITT Tech students should be saying to the all-knowing, all-wise Department of Education: Screw you, it’s my life.