Will Prostitution Become Legal in America? 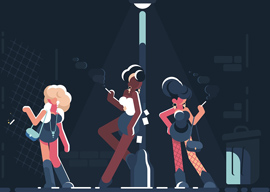 The compromise would be particularly useful now that marriage makes such little sense for men. “Women rate an incredible 80% of guys as worse-looking than medium,” says OKCupid founder Christian Rudder. “The average-looking woman has convinced herself that the vast majority of males aren’t good enough for her.” Rudder gives us several representative photos of men who range from truly average to handsome. Then he concludes the summary of his research with this comment: “Females of OkCupid, we site founders say to you: ouch!…it’s women, not men, who have unrealistic standards for the ‘average’ member of the opposite sex.” Rudder’s finding corresponds to the fact that women file for seven out of ten divorces, in a reflection of their delusional expectations.

Now, to be sure, human nature is itself delusional, and if women are more delusional than men in regard to sex and romance, the main reason is that, given their superior value and power in the sexual marketplace, they can be. More than men, women are able to realize the intrinsic inclination. Anyway, add to this commonly delusional perspective how badly divorce laws affect men, and we should expect that in the future more men will view marriage as an investment not worth making. This seems all the more likely since men still pay for more than women do in marriages, even as the latter control more of household spending and get preferential treatment in most areas of life.

In our age of feminist hysteria, when the criterion for “unwanted advance” is a woman’s personal whim, and when a casual joke can cost one a job, a growing number of men are distrustful of women in general. Soon, a man who has much to lose may not only avoid marriage; he may eschew dating as well, for today the very act of pursuing a woman can be a risky endeavor, and is a massively inefficient use of time in any case. On the other hand, legal prostitution would be relatively simple and straightforward, a man knowing just what he’s in for.

So, men may well join feminists in calling for legal prostitution. Certainly these two groups—feminists and disadvantaged men—are not going away anytime soon. On the contrary, they are likely to become only more numerous and more influential. Feminist advocates of legal prostitution include the prominent Martha Nussbaum, who has made a nuanced argument in favor of it.

Another causal factor might be the elimination of jobs through artificial intelligence. If work is scarce, may not some women, and some men too, want to sell themselves to pay the bills?

But I don’t mean to be misleading. It is simply not the case that every prostitute is poor and without better options. Indeed, today there are many women from middle-class backgrounds who choose to be sugar babies—which is no different in kind from turning tricks on the corner. These are women who have graduated from college, or are in it, and though they could do any number of other things to make money, they choose to be prostitutes because doing so is simpler and better-paying.

If those who support legal prostitution can overcome the formidable religious and moral objections to and prejudices against it, then corporate America, always spineless and soulless, will be happy to get in on the business. For corporate America stands for nothing but making money. It will follow the crowd to hell itself, virtue-signaling the entire way. And undoubtedly there is plenty of money to be made in regulated prostitution.

The best case against legal prostitution is from a traditional conservative point of view, which I will outline in brief. Human societies are too complex to be determined by sheer individual autonomy, or the harm principle, or purely pragmatic considerations. It is necessary to ask what people, and states, and things are for, and how we should live accordingly. There is such a thing as indirect harm, and not only to the agents involved, but to everyone over time. Conservatives are wary of big changes, because they have a keen sense of how fragile the good is, and they know that even progress has a way of producing unexpected problems. Marriage must be protected, for it is the character-forming social unit on which the state itself depends; but legal prostitution, by allowing for easy and readily available sex, is destructive of marriage and therefore of the state itself. We should respect, and revere, what has worked well enough so far, because it is the hard-earned fruit of experience, wiser than us and more valuable than that which seems desirable to abstract reason.

I lack the space to make a stronger argument, but I will say that, in view of the changes that have happened in America—in view, in other words, of what America has become—it’s not clear to me that this traditional conservative argument is worth much these days.