A native Chicagoan, Matthew A. Rarey is a lover of the tried and true. Believing that without God anything is possible, our cultural and spiritual madness being awful proof, he strives to bring timeless truths to our topsy-turvy present. His writings have appeared in a variety of publications, from The Catholic World Report and Chronicles to The National Catholic Register and The Washington Times. 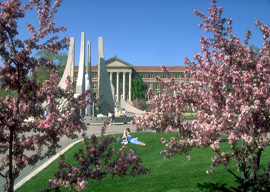 "The only unnatural sex act is that which you cannot perform." "Alfred Kinsey,...

Ukraine has known much darkness. And the long, sinister night of the twentieth century continues to cast shadows deep and wide. At this unique university, however, God’s light shines brightly, showing how wonderful that culture is where minds and hearts are formed in Christ.

Good and Evil in Lviv, part I

With memories still slick from the worst blood-letting in history, followed by the less dramatic horrors of the Soviet “peace,” the modern-day evil I witnessed wasn”t the worst thing ever to have happened in the city of Lviv, western Ukraine. But it surely was the offspring of the grossly satanic events of the preceding century. In this neighborhood marred by old evils, a stodgy woman fumbling up the street precipitated a new nightmare.

The Anatomy of Cruelty

No man can create an animal, but history shows men terribly capable of making animals of themselves. To be fair to the lower orders of creation, however, they don’t deserve to be grouped together with self-debased humans. While we can lower ourselves, smothering the spark of the divine that makes us human, animals cannot rise above their natures. Besides, some animals have exhibited a certain nobility that reminds us that one Creator made us all for each other’s mutual benefit. So it would be cruel to put Lassie or Robert E. Lee’s horse Traveller in the same pen with disgraced football star Mike Vick, who cashed in civilization for savagery.

Mass with Pat Buchanan and the King of Rwanda

I live on Capitol Hill. And on Sunday mornings I walk to Mass, either to St. Joseph’s on the Hill for convenience or, if I’m not too hung over, the earlier nine o’clock Tridentine Rite at Old St. Mary’s in Chinatown where the congregants include Pat Buchanan (Does he own but one suit, dark and pin striped?) and the abdicated king of Rwanda.