10 Attacks Committed by Terrorists Radicalized in the West 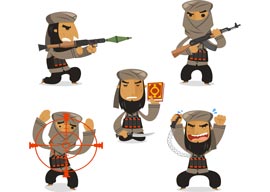 A picture recently surfaced of radical Islamicist Anjem Choudary surrounded by beers and a girlie mag. He’s presumably in college at the time and appears to be a perfectly normal British kid. Choudary has since become one of the most irritating fanatics in the Western world and has been accused of radicalizing many other Muslims, including “John the Beatle,” who cut off James Foley’s head, and one of the London beheaders.

When I was in college, America haters were cool, and the mulatto chick (who grew up with her white mom and never met her black dad) would recite passages from Malcolm X with her fist in the air as we all drooled and clapped our hands like giddy sycophants. Things have been getting progressively more insane since then. Today we have NYU students barricading themselves in the cafeteria, demanding the school provide them with Palestinian friends (see 10:16); Duke University almost wound up sounding the Muslim call to prayer on Fridays. We”re quickly going from thinking it’s cool to have radical friends to radicalizing our friends because it’s cool. In the name of promoting tolerance and eradicating hate the West has become a jihadi training camp.

September 11th was back in the glory days of terrorism. The guys who flew the planes into the towers weren”t from here. Osama bin Laden refused to go to Western schools and was radicalized over there too. Since then, I can”t find one attack on Western soil that wasn”t committed by terrorists who were radicalized here. If you include attacks that weren”t successful, there are dozens upon dozens.

Yesterday, we learned of a high school wrestler from Cincinnati who was about to bomb D.C. because he’s Raheel Mahrus Ubayda now. The Portland Seven were all radicalized here. Same goes for the D.C. Five and the Herald Square Bomber. Jihad Jane is a blonde from Michigan and five of the Buffalo Six were born in America. The Muslim population in Buffalo is soaring as the number of Jews and Christians declines. This has parents such as Muzzammil S. “Mo” Hassan worrying their children will become radicalized. Mo prefers more moderate acts like beheading his wife.

“In today’s tolerant society, dumb jocks like him grab their wimpy beta male brother and sign them both up for jihad. Didn”t anyone make fun of them? Can we at least key their car?”

What makes this trend even more dangerous is that the press denies it. They call the terrorists mentally ill lone wolves and insist their religion is irrelevant. As Marc Lamont Hill over at CNN said, “People behead for all sorts of reasons.” When Anton Nolen decapitated Colleen Hufford in Oklahoma, MSNBC’s Melissa Harris-Perry called it “workplace violence“ and neglected to mention he had recently changed his name to Jah”Keem Yisrael and wouldn’t shut up about Islam. His Facebook page featured the Koran’s “smite ye above their necks” verse.

They are turning the other cheek in the midst of a mutiny and it’s putting all of us in danger. I was just at CNN shooting a spot about all this for one of their affiliates (Sun Media), and the building appeared to be filled with Muslim guests telling erudite white hosts how to feel.

Where’s the stigma? We”re at war. After the attacks in Ottawa, so many young Canadian men flocked to the country’s largest mosque ready to convert that the imams were overwhelmed. Ottawa-born convert John Maguire was just killed in Syria fighting for ISIS. He looks like a hipster. Sorry, “looked” like a hipster. If an American converted to Nazism in 1942, he”d be a pariah. Today, this kind of treason gets you invited to the White House. Our tolerant culture has blood on its hands and here are 10 reasons why.

2001 “ THE SHOE BOMBER
Richard Reid was a half-black Jamaican kid from Bromley. If he were a little older, he might have been part of “The Bromley Contingent,” a group of punks that included Billy Idol and Siouxsie Sioux. The new rebellion, however, goes way past punk and deep into ancient religious texts.

After serving a long sentence for stealing a car, Reid’s father encouraged his son to convert to Islam because the food is better in prison for Muslims. Reid obliged and the next thing you know, he’s trying to take down a plane. Respecting a prisoner’s religion sounded like a good idea at the time but America is also learning it’s become a breeding ground for terrorism.

2002 “ THE BELTWAY SNIPER
Louisiana’s John Allen Muhammad became a radical Muslim shortly after joining the Nation of Islam. Muhammad and his accomplice shot ten infidels dead in and around the D.C. area. The press treated his religion like it was a silly hairdo and avoided mentioning it. Meanwhile, John’s prison wall sketches included a portrait calling Osama bin Laden a “Servant of Allah” and a self-portrait that says: “We will kill them all. Jihad … Allah Akbar!”

2005 “ LONDON BOMBINGS
All four of the Islamist men responsible for the bombings were homegrown. Mohammad Sidique Khan, Shehzad Tanweer, and Hasib Hussain were from Leeds while Germaine Lindsay was a Jamaican from Buckinghamshire. These kids used to watch cartoons and play soccer and eat fish and chips. Lindsay was a carpet fitter married to a pretty white Irish girl before leaving it all for Islam and getting behind a series of bombings that left 52 British infidels dead as well as him and his three accomplices.

2009 “ FORT HOOD SHOOTING
Nidal Malik Hasan was a nice little fat kid who worked in his parents” restaurant and joined the military so he could help people. During his service as a psychiatrist for soldiers suffering from PTSD he began warning his fellow officers of his impending radicalization. He told them they would be “ripped to shreds” on behalf of Allah but they ignored it because it’s xenophobic to notice hate. Soon after, he ripped 13 of them to shreds.