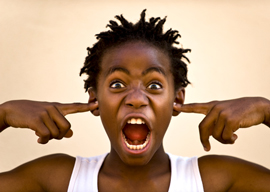 Liberals love blacks but they love them like a fantasy football team, not like human beings. Black poverty is the crux of the leftist argument. The ethos goes: if you”re a Democrat, you want to help the impoverished African-Americans. If you”re a Republican, you want them to be attacked by German shepherds. As far as actual black culture goes, liberals are disappointed that they aren”t all wearing corduroy blazers with elbow patches and listening to NPR.

They believe black culture has been hit with “systemic” (gawd, they love that word) problems, including a lack of education when it comes to homosexuality and a lack of information when it comes to education. They used to say blacks were starving, but then obesity became an issue so now liberals say blacks are suffering from “food insecurity.” (Kind of like when global warming turned out to be a myth so they swapped it for climate change.)

As far as actual black human beings go, the white middle class is totally lost. They”ve never met one. They have no idea why some women have straight hair and how much that costs. They don”t understand why you don”t see blacks camping and assume it’s because pamphlets don”t show enough diversity.

One of the reasons white, middle-class liberals are so out of touch when it comes to their favorite race is they don”t go near them. They don”t send their kids to poor schools and they make sure their homes are as far away from the lovable Negro as possible. Sure, they have a black friend, but it’s a mulatto girl who grew up white and champions her black power beliefs because her white friends enjoy it. Liberals” black friends don”t really have black friends themselves because they”re freaks. In black America, watching Doctor Who is like being Doctor Who.

Democrats need the black vote to win elections, but blacks are wary of fans who are all talk and no action. If the left wants to hold on to the ebony vote, they”re going to have to do their research. Here are 10 quirky traits to start with.

“Blacks are more Christian than whites, especially when it comes to seeing homosexuality as a sin. For the left, this is so sad, it’s like seeing your two favorite pets fight.”

1. ALL BLACKS CAN SUMMON THE GANGSTA

Try to imagine hearing an old-money aristocrat on the Upper West Side say: “I can get redneck if I have to. I”ll go up yonder holler and tan that old bastard’s hide.” Upper-class white people don”t have a connection with the lower orders. They don”t even understand them. If Brooke Astor had ever met Eminem, the entire conversation would have been a sea of pardon mes.

No matter how posh an American black is, on the other hand, he can summon the ghetto version of himself at the drop of a hat. This is because even if he didn”t come from that world, he has a cousin who does. No matter how rich a black American is, he likely has a crackhead relative who abandoned her kids and it’s now his business. When this Ivy League CEO has to deal with the babies” daddy, he goes from “Good day to you, sir” to “Listen, motherfucker, don”t think I won”t eat your food.” (“Eat your food” means “cut your face.”)

2. BLACKS AIN”T DOWN WITH THE GAYS

This is a bitter pill to swallow for liberals so they put it in the plant and tell the doctor they took it. During a Trayvon demonstration, a white hippie got on a megaphone and said he was sick of the oppression of minorities such as African-Americans and the LGBT community. A stocky black woman then grabbed the megaphone and informed him that the issue at hand was “not no gay shit! None of that!”

Democrats would have loved to blame California’s Proposition 8 brouhaha on Christian whites, but they were only half right. When they found out the Christians opposing gay marriage were black, they decided to move on to other topics. Blacks are more Christian than whites, especially when it comes to seeing homosexuality as a sin. For the left, this is so sad, it’s like seeing your two favorite pets fight. Actually, it’s not like that. It is that.

The reason why is hard to grasp for the left, because it comes from another planet, a black planet. Due to higher incarceration rates, more blacks per capita have experienced prison life than whites. There is a lot of voluntary gayness that goes on in there because there are no vaginas. This culture bleeds out of the prison system and into the hood so often, there’s a name for it: the down low. When blacks say “Will you stop doing that faggot shit?” they”re not talking about Adam and Steve making sweet, oral love on their wedding night. They”re talking about Raquan getting a blow job in an alley from Jerrick because they”re both high.

The majority of black Americans would rather have a beer with an Archie Bunker type who talks about the dangers of “negro neighborhoods” (which he lives right next to) than the Gawker blogger who keeps whining about “crackers” and annoying “white men” like his own father. Blacks don”t appreciate the ethnomasochism of whites. They think it’s on some bitch shit.

4. THERE IS NO SUCH THING AS SELLING OUT IN BLACK AMERICA

If a broke white comedian appears briefly in a commercial for motor oil he becomes a pariah. The more esoteric the art form, the more verboten it is to profit from it. Punk rockers are barely allowed to have enough money to eat.

Rappers have the opposite set of rules. If you”re in NWA and you want to do a commercial for malt liquor, you are “getting yours.” There appear to be no boundaries whatsoever with this phenomenon. I”ve even seen a Coke commercial where the rapper Common sings about how pathetic it is when people sell out. The lack of self-awareness in this ad is a perfect example of how totally oblivious black entertainers are to the concept of selling out.

5. DOMESTIC VIOLENCE IS NONE OF YOUR BUSINESS

Whites across the political spectrum see beating a woman as one step down from murder. Blacks hate it too but they prefer to keep the whole thing in-house. If a white celebrity was caught hitting his wife, the couple would split and we”d never hear from him again. Maybe it’s because so many blacks have been sent to jail for domestic violence”one prison guard in Queens told me about a third are in there for “domestics””but they don”t see getting the authorities involved as beneficial for anyone.

When Rihanna was beaten to a pulp by Chris Brown, black America remained relatively silent while whites wouldn”t shut up about it. She posted a picture of her face and we couldn”t believe our eyes. Black America got over it and Rihanna herself was seen canoodling with Brown a short time later. This left whites in the awkward position of being angry with the victim. Blacks don”t need allies like that.

Recently, Ray Rice delivered a knockout punch to his wife-to-be. Whites reacted with an onslaught of hatred and assumed his wife (they married anyway) would be on board. She wasn”t. In fact, she wished everyone would just mind they own damn business. White America kept pushing until Rice was let go and both Rices were out of a future. When Rice’s wife got even angrier, the liberal left lashed out at her the same way they did with Rihanna. Some kept digging until they could find someone white to blame. Keith Olbermann focused his hate on the NFL commissioner.