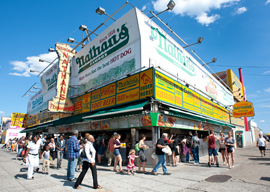 When I think of real New Yorkers, I think of Irish and Italians born and raised in Brooklyn. This borough is what keeps Manhattan alive. As far as I”m concerned, it saved the world from fascism. (Is there a soldier in a WWII film who doesn”t have a Brooklyn accent?) After getting to know some Brooklynites, I realized they are way weirder than I originally thought. Their customs and traditions are as unique as the Amish and their culture is equally untouched. Most of the purists would be totally uncomfortable around the lost tribes of Brooklyn they so staunchly defend.

For example, did you know…

1. THEY CALL PASTA SAUCE “GRAVY”
These are Italians who have been eating nothing but spaghetti their whole lives and they think tomato sauce is meat juice. When I ask them why, they usually say, “I don”t know why we call red sauce gravy but it’s always been like that.” What the hell is “red sauce”? They also call all forms of pasta “macaroni” even when they”re holding a box of clearly marked penne in their hand. Learning their language can take months, which most of their women find “”isterical.”

2. THEY IRON THEIR SOCKS
This applies mostly to older Brooklynites, but they all wear a very affordable uniform and maintain it with military precision: white sneakers, white socks, knee-length hemmed jean shorts, tucked-in white T-shirt, and assorted gold jewelry. None of these things require an iron, but each one gets it”sometimes even the gold jewelry. They don”t understand why anyone would stray from this perfect ensemble, and when you show up wearing anything different they laugh and say, “Where you goin”?” This is an abbreviation of, “Where are you goin” with that ridiculous outfit on?”

3. THEY HAVE GREAT STORIES
It’s not unusual to walk up to an electrician named “Joey Makeup” (named so because his eyelashes are so big, he looks like he’s wearing mascara) and hear him telling his friends, “I told you my mother’s scared of midgets, right?” Everyone will already know this because they”ve all been friends since kindergarten and then he will add, “Well, guess who her new best friend is…the fucking midget from the Laundromat!” This person’s friends will tell him to get the fuck oudda here, and he will put his hand on his heart and say, “I swear on my life”BEST friends. They”re at the movies right now.” The more questions you ask about this story, the better it gets and everything will be almost entirely true.

4. THEY”RE RACIST IN A GOOD WAY
If someone from Brooklyn is talking about a neighborhood that has become predominantly African American they will touch their cheek the way you do when you”re telling someone they have something on their face”only in this case, the thing on the person’s face is a race. Breezy Point in Queens was a vacation getaway in the 50s but became home base for white flight when Brooklyn became multicultural. However, they still intermarry and hang out with blacks way more than anyone who reads The New York Times. To them, blacks are like Polacks or punk rockers. They don”t dislike them. They merely see them as different. One day you”ll hear some guy complaining about how “Da niggas, dey always late” and the next day he shows up two hours late with his black wife yelling, “Guess why we”re late? Guess whose fault it is! These people, I tell ya. They”re unbelievable.”

5. THEY”RE DUMB IN A GOOD WAY
Thanks to liberals” fear of eugenics, IQ has become this delicate taboo you can only discuss when someone on the losing team has a surprisingly high one. Brooklynites don”t have this hierarchy of intelligence. They don”t even see it as a particularly appealing trait. When someone from Brooklyn tells you they”re dumb, it’s about as consequential as saying, “I can”t draw.” They don”t pretend they know what “parochial” means, and they”re not going to ask you where the West Bank is. They don”t care who invaded Gaza. They care who broke into their neighbor’s house.