10 Good Reasons Not to Assassinate Obama 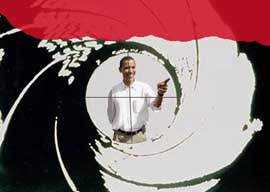 America has now elected its first half-black president to a second term, which, if you understand math, means that America has finally elected a fully black president to one term. A little more than half of America is gloating like drunken pigs on moonshine. A little less than half of America is brooding with a smoldering sense of resignation and perhaps permanent cultural defeat.

Among the latter contingent is a young fat blonde pimply idiot woman in California who recently Tweeted the following:

Another four years of this nigger, maybe he will get assassinated this term..!!

The woman lost her job as a result. It was reported that she was being “probed” by the Secret Service, and we all know how painful that can be.

“Don”t even kill him with kindness, because he clearly doesn”t deserve it.”

This is not the first time someone has publicly hinted it”d be a good idea for Obama to be assassinated, and for some reason young white women (such as this one and this one) seem to be leading the pack. But young black men have also made similar threats and a young man of apparently Hispanic derivation even shot at the White House last year, perhaps not realizing Obama was on vacation.

Louis Farrakhan has said that “they,” which almost always means “the Jews,” want a Muslim to kill Obama, while others allege that Mossad wishes to slay him. There have been numerous other assassination threats against Obama involving such disparate elements as a Waffle House, a bail bondsman, and an Irish Muslim.

Because I can”t even bear Jehovah’s Witnesses knocking at my door and therefore wouldn”t like it if Secret Service agents came a-knockin”, I suppose here is where I should offer the disclaimer that I don”t think it”d be a good idea if someone were to assassinate the president. Here are ten reasons why.