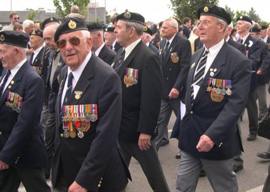 Ever hang out with an old dude? They’re pretty great. They’re not self-obsessed the way boomers are. They’re not “over it” the way Generation X is, and they’re not completely tuned-out like the kids today. Here are ten more great things about them:

1. THEY FOUGHT IN A WAR
WWII and Korean War vets have amazing anecdotes. Sure, it’s horrific to hear about fighter planes cutting people in half with lines of spraying bullets, but old guys know how to temper the bad with some hilarious good, like the time that guy took a shit in an officer’s shoe.

The older Vietnam vets are fun to hang out with; the younger ones, not so much. Getting war stories out of them is like pulling teeth, and when they do finally give you some details, they get this lost look in their eyes that bums out the whole party.

2. THEY TELL GREAT STORIES
It’s not only their war stories that are a barrel of laughs. These guys have been honing their material for decades and have the whole “beginning, middle, and end” thing down to a science. I was lucky enough to hang out with Jimmy Kimmel’s uncle Frank a few years ago, and his yarns about being NYPD in the 1950s made me want to buy a time machine. “The amount of young ladies I was with back then would shock you,” he told me. “They loved the uniform and it loved them.”

“Because they come from a time when everyone who wasn’t a WASP deserved to be made fun of, old men have an endless list of zingers that sound like a celebrity roast for multiculturalism.”

I recently had lunch with Marshall Bell, and his stories about Hollywood groupies always tied into a bow beautifully at the end. When he said to Warren Beatty, “I can’t believe the amount of women who throw themselves at you. Most men would go insane in a situation like that,” Warren replied, “Not most, Marshall—all,” and pointed to himself.

3. THEY’RE POLITCALLY INCORRECT
They don’t even know “gook” is a bad word, and to hear racial epithets laced seamlessly into the dialogue evokes a time when we didn’t have to worry about such bullshit.

Old men laugh in the face of every “ism” and “phobia,” and if that offends you, they laugh even harder—as Taki did when he was vilified for saying “Ashes to ashes, dust to dust, and if you liked pussy, you’d still be with us” about Liberace’s death.

4. THEY’RE SELFLESS
He may be an old man now, but the second his first kid came out of his wife’s vagina, he peaced-out the whole idea of “me” and mentally switched it to “the family”—forever. He’d happily work seven days a week if it meant his family was provided for, and his idea of a midlife crisis was finding out his kid didn’t get into college (an opportunity he never had).