10 Great Things About the Brits 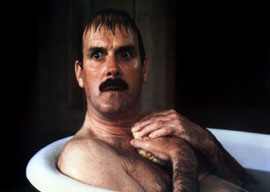 A lot of things about Great Britain aren”t so great. Their bathrooms are freezing and if you want a shower, you have to turn on the hot water tank and wait twenty minutes. They have class stuck so far up their ass, they still define a man by his accent. They”ve allowed Islam to bully them so thoroughly, Muhammad is the second most popular name for English and Welsh baby boys. I could list problems with the redcoats all fortnight, “But seas between us broad have roared/Since auld lang syne,” and it’s worth spending some time this holiday season remembering what we love about those pasty-faced poms.

1. THEY STILL MAKE GREAT CHIPS
Not potato chips”those are called “crisps.” I”m talking about a fat, chunky piece of potato that hasn”t been frozen and fried so severely, it tastes like someone left a pencil in the microwave. Britain still has the same chip vans it had 50 years ago and to bite into a moist, blanched potato wedge drenched in vinegar and wrapped in newspaper is to remember a time when drunken snacks were the best part of the night.

“I was born in England, my parents are Scottish, and I grew up in Canada, so swearing like a drunken sailor is called “speaking English.””

2. THEY SWEAR
I was born in England, my parents are Scottish, and I grew up in Canada, so swearing like a drunken sailor is called “speaking English.” The word “cunt” means “friend” as in, “It’s your round, you cheap cunt,” and “fucking” means “very.” In America, talking to people like that makes their faces jump and flinch like you”re lighting off firecrackers at their feet. If you do it in the South, it breaks their heart.

4. THEY UNDERSTAND THE ART OF CONVERSATION
The word “like” hasn”t completely taken over Britain yet. They also understand that a conversation is supposed to actually go somewhere. It’s not just a table of people telling stories about themselves. It’s a means to an end. I”ll never forget the time I was in a pub in London and talked to a guy for about half an hour about all the horrible things England has done while conquering the world. It was a fascinating look back at history, and we embarked on the journey after he found out I was Scottish. When we were done he said, “Ah-ha! Every event I just listed was actually perpetrated by Scots.” The guy wasn”t just talking. He was sculpting an entire conversation into a double-edged sword that eloquently chopped off my head.

5. PUB CULTURE
It’s not unusual to walk into a pub and see a punk rocker with a blue Mohawk and a studded jacket sitting with an 80-year-old man in a tweed cap. If you lean in, you”ll hear the teenager say, “It’s not that I don”t love her. I”m just in over me head” and the old guy will reply, “Don”t beat yourself up about it Reg, she”ll come around.” Everyone’s your mate in the pub and they are happy to talk about anything, even pub culture. Ask a Brit about small pubs losing their business to big chains such as Wetherspoon and he will pound the bar with his fists while screaming, “It’s a bloody shame and it will be the death of us! Mark my words!” In Scotland, they”ll do it while drinking at a Wetherspoon pub.