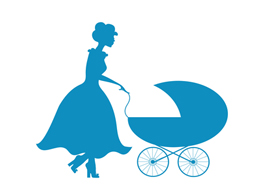 Well, first of all, hummina hummina! Having some twentysomething bouncing around your house in a French maid’s costume is a great reward for being wealthy enough to hire help. Just kidding. If you can”t handle having a young woman in your home, you need to sign on with the National Sex Offender Registry under the “Accident Waiting to Happen” Act. Besides, if there’s one thing Arnold Schwarzenegger taught us, it’s that men who are willing to throw their marriage away on infidelity don”t really care what the nanny looks like.

When I say “nanny” I mean a girl who does the lion’s share of babysitting and comes in a few days a week to help out. When I say “young” I mean Western and, more often than not, white. Young foreigners usually lack the credentials and references to take on these kinds of responsibilities. The non-young nannies are sometimes Filipina, but here in the Northeast they tend to be Jamaican, Polish, and Latina.

“Seeing some woman hang around the family indefinitely because she has nothing better to do is depressing and tells your daughter the world doesn”t have much to offer.”

When a Jamaican lady agrees to become a part-time mother, she’s looking for 40 hours a week. Those kinds of hours add up fast and before you know it, you”re spending just below the average American salary on a below-average mom. Young nannies are flexible and have other sources of income if you don”t need them that week.

The worst part about young nannies is actually the best part. When you hire a woman in her mid-twenties, she’s on the cusp of having a life. Within the next few years she’s going to get married and have kids, or embark on a career, or both. This may seem inconvenient but it’s not. My daughter watched her previous nanny leave to start a career and later my daughter was the flower girl at her wedding. That’s inspiring. Seeing some woman hang around the family indefinitely because she has nothing better to do is depressing and tells your daughter the world doesn”t have much to offer.

Hiring a Filipina nanny who has kids back at home isn”t just weird. It’s morally wrong. In the book Global Woman, we learn of caregivers who end up doing more for the kids they look after than the ones they send money to every month. The book discusses the children of these nannies, and they say they would never do the same to their own kids.

“Every time I hold these kids,” says one Filipina nanny in an NPR report last year, “it’s like I feel like this is supposed to be my child that I’m holding.” I”m amazed how much white liberals worry about organic eggs and only adopting rescue dogs, yet they have no problem buying someone else’s mom. They care more about animals than they do human beings. We complain about third world countries using child labor, but importing love from an impoverished country is downright evil.

Some moms think it’s cute to hear their daughter say the patois “gyal” instead of “girl.” I don”t. Having the language at your disposal is one of the most crucial tools a person can have”no matter what profession they choose.

Of course, you need to sit down with young nannies and explain that “like” is as bad as “nigger” in your home, and it takes some practice for them to get it out of their vocabulary, but after that, the kids are learning English from a native speaker who’s always known “ask” is not spelled a-k-s.

The babies today are not your grandfather’s babies. They”re huge. Carrying around a 30-pound ball of flesh all day will crush an old lady’s spine. Young women dance around with a baby on their hip like he’s a human fanny pack. When the baby goes down, they don”t collapse on the couch in exhaustion. They get bored and start cleaning. I”ve never asked a nanny to do the dishes or vacuum. They just do it. Then when the kids wake up they yell, “I gotta get out of here. Let’s go to the park!”