10 Hatefacts for Those Who Hate Facts 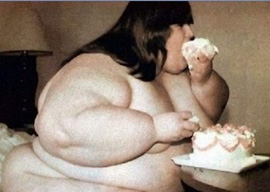 I first encountered the word “hatefact“ while drinking with someone”either “shock jock” Anthony Cumia at a grimy Midtown bar or VDARE‘s erudite Peter Brimelow at the incurably snobby New York Athletic Club. These two characters are about as different as American men get, but they both ask a question a lot of Americans are asking: How did we get to the point where facts are offensive? This country started out with Thomas Jefferson saying, “There is not a truth existing which I fear…or would wish unknown to the whole world,” but today’s liberal-arts graduates have created an environment where anything that makes anyone uncomfortable is hate speech, even if it’s true”in many cases, especially if it’s true.

Here are 10 true statements that millions of Americans find offensive:

1. IT’s NOT QUITE HEALTHY TO BE A FAT PIG
Yes, some people are born with big bones and others have a disease called “burns less calories than they take in,” but anyone who’s visited China in the past 100 years can see that Americans have a disproportionate number of fat pigs. These whales complain that they are seen as human garbage, yet they treat their mouths like fast-food dumpsters. Please explain to me how that is different from putting on blackface and complaining about racism.

2. OVERPOPULATION AIN”T SO GREAT FOR THE ENVIRONMENT
When you”re a kid, you assume being Green is recycling coffee cups and putting old newspapers in a blue bin. After reading, I don”t know, one book, you realize there is nothing an infinite population can do to sustain itself. So you take a peek at who’s doing all the breeding. Turns out, in America at least, homegrown citizens are keeping their population at about zero growth, whereas immigrants are responsible for pretty much all of it“a phenomenon called “The Wedge.” When the Sierra Club was confronted with this inconvenient truth, they split into two groups. One side decided to accept this hatefact and the other decided to pretend it didn’t exist. The pretenders have done well with funding; the hatefact-mongers haven’t.

“How did we get to the point where facts are offensive?”

3. IT MAY BE A BIT HARDER TO SQUEEZE OUT A CHILD AS YOU GET OLDER
This is probably my favorite hatefact because if a guy who spent six years in medical school repeats what he learned, it’s hate speech. Sorry ladies, but your ovaries have a shelf life. At 30, the hourglass turns upside down and it gets progressively harder to have kids. By 35 the sand is all but gone and it’s incredibly difficult to breed. My wife had our first kid at 32 and she was wheeled through a hateful door that said “Geriatric Mothers” on it. As is always the case with feel-good propaganda, it ends up hurting the people it purports to help. I don”t know how many of my mid-30s female peers are stunned by how hard it is to procreate. Sexist facts could have drastically improved their lives, but they were hidden because the truth hurts.

4. PEOPLE WITH DIFFERENT SEXUAL PREFERENCES SOMETIMES ENJOY DIFFERENT LIFESTYLES
When Act Up!’s Larry Kramer criticizes the gay lifestyle and insists, “We are murderers, we are murdering each other,” he is seen as a crusader for justice. If the rest of us simply utter, “Jeepers, them gays sure do fuck a lot,” we are woefully naÃ¯ve. The Daily Show‘s Jon Stewart scoffed at people who assumed gays live any differently than straights by pointing out he lives in New York City, where everyone is decadent. Ahem: Jon? Circuit parties go on for three days and the attendees do so much crystal meth, they are able to fornicate nonstop throughout the entire event. This seemingly infinite amount of friction their poor bums and dinks are forced to endure has consequences. Nobody’s saying anyone deserves AIDS, but it shouldn”t come as a shock to anyone who contracts the virus at one of these parties.

5. CERTAIN GROUPS MAY NOT SHINE SO BRIGHTLY ON IQ TESTS
This one feels blasphemous to even type. Who cares if blacks score worse than whites, who score worse than Asians? We”re talking about general patterns involving millions of people. I come from a long line of incredibly stupid drunks and I feel zero shame about it because I know they”re not me. We”re told the tests are culturally biased but that doesn”t explain why Asians all over the world repeatedly outscore the rest of us. I don”t care about that, either. I feel no envy for China. This data is treated like some kind of Raiders of the Lost Ark scroll that will melt your face if you look at it, but I don”t find it disturbing at all. As is made clear in the The Bell Curve, the curves have huge overlaps showing there are thousands of blacks smarter than whites and Asians, while plenty of stupid Asians are way dumber than most of us.