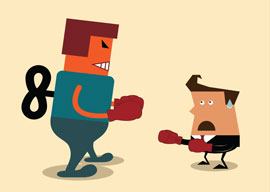 This is so typical of them. By “this,” I mean a liberal rant that is either a blog post or a social-media crusade or a Wikipedia edit meant to humiliate their opponent. The roots of this culture go back to the Frankfurt School but really got momentum from college professors indoctrinated by manifestos such as Saul Alinsky’s Rules for Radicals.

By “them” I never mean educated alpha males prepared to give rational arguments. I mean the churlish left’s frustrated beta males, bored girls, and bullied gays hell-bent on revenge.

Authors such as Ann Coulter and Jonah Goldberg take the high road and rarely even read such rants. “I’d never give them the pleasure,” Goldberg once told me. Breitbart used to call it “punching down.” However, when you diligently assemble a controversial argument with “some degree of vigor,” ignoring a critique takes some willpower. One thing you’ll notice about these ridiculous rants is that they all look the same.

1. SPELL YOUR ENEMIES’ NAMES WRONG
Oxford’s Writing and Style Guide makes it clear: “Great care should ALWAYS be taken to spell the names of people and companies correctly,” but leftist smears often spell the name wrong. Kitchens missed her criticisms the first time around because “The fact that she referred to me by the wrong last name added to the confusion”an error they later fixed without any indication of a correction.”

2. PRETEND THAT LOGICAL FALLACIES CONSTITUTE AN ARGUMENT
In high school we learned about straw-man arguments, ad-hominem attacks, and guilt by association, but today’s leftist bloggers were apparently playing hooky that day. For example, anything remotely non-liberal about race instantly becomes, “Why are you so scared of brown people?” and the argument becomes all about a petrified scarecrow that isn’t even there. Whenever a male says something construed as too macho, we hear ad-hominem attacks about his tiny penis. And the SPLC wrote the book on guilt by association. The “Far Right Embraces Book That Rewrites Matthew Shepard Case,” said a recent headline. If homophobes like his book, then gay author Stephen Jiminez must be a homophobe. If Hitler used toilet paper, we must all be Nazis.

3. MAKE YOUR HEADLINES HYPERBOLIC AND PATENTLY FALSE
Kitchens never said anything about “drunk college sluts,” but it’s easier to argue against a fictional character. What used to be a dirty trick reserved for the National Enquirer is now commonplace among the Gawker types. “Racist,” “Homophobic,” and “Sexist” are tossed into the headline with no qualification whatsoever, and in an era where people rarely make it past the first couple sentences, that’s what sticks.

4. USE FIGHTIN’ WORDS SUCH AS “TAKEDOWN”
The more beta the male, the more they love using boxing terms. It reminds me of the way women in the fashion industry are always using Ebonics ironically with lines such as, “I swear if she doesn’t get me those samples by five, I’m going to bust a cap in her ass.”

5. NEVER DISCUSS THE FACTS
What used to be two sane adults comparing data has become nothing but catty insults. As David Derby says in his book Snark: It’s Mean, It’s Personal, and It’s Ruining Our Conversation, it’s “indolent parasitism as a work ethos.” These people are so used to preaching to the converted, simply repeating what their enemy said while dripping with incredulity is enough. If you were to say, “There are more black neurosurgeons on TV than in real life,” their response would be simply to repeat that quote and scream, “Can you believe this shit!?” Instead of refuting this statement with actual numbers we’d hear about what a racist asshole this person is, and his statement would be twisted into “Bigot Says Blacks are too Stupid to Become Doctors.” The next time you hear about this guy, it will be from the person next to you at a restaurant whispering, “That’s the guy who said he’d rather die than let a black surgeon operate on him.” In the critique on Caroline Kitchens, the author improves her argument with a GIF of Kristen Wiig saying, “Are you fucking kidding me?” As Alinsky points out in Rule #5, “Ridicule is man’s most potent weapon.”