10 Reasons Not to Go on a Disney Cruise 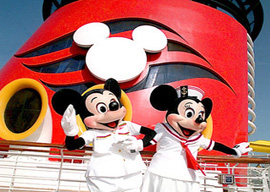 Online reviews for Disney Cruises read like effusive testimonials from someone who has been healed by the Lord’s power. But after returning from the Disney Magic cruise with my wife, two-year-old son, and four-year-old daughter, I feel more sickened than healed. It’s been four days since we came back and the trauma is only now starting to wear off. Here’s why it sucked…

I”m covered in tattoos, so I get it if Middle Americans are weird around me, but outside of some slightly Chinky eyes, my wife looks like any other Madison mom. We dressed very square and approached the trip with a positive, pro-social attitude, but the other passengers treated us like circus freaks in Nazi uniforms.

Here’s a typical exchange: My wife was ordering a drink at the poolside bar and the woman next to her had just procured a margarita. “Oh, a marg!” my wife said cheerily. “That looks like a good idea. I”ll have the same.” The woman looked at my wife blankly, picked up her drink, and walked away. This happened regularly. People weren”t mean or grumpy, they just didn”t know what to say because they live in suburban seclusion and rarely interact with strangers. They didn”t merely not talk to us. They didn”t talk to anybody. Hey lady, how about, “It’s 5PM somewhere” or “The kids drove me to it” or a million other silly quips that my wife’s comment invited? How about simply a nod and a smile?

It wasn”t unusual to say, “Hey, how you doing?” when sitting down next to someone and getting zero response in return. Eventually, my wife and I got in the habit of saying, “All righty then” after every catatonic response.

2. THE BOOZE PRICES ARE RAPE

We boarded on Saturday afternoon and on Tuesday I checked our room’s balance sheet. I assumed the decimal place had scooched over to the right when they told me I owed the company store $972! “What?” my wife screamed, grabbing the bill and discovering half of it was our bar tab, “I didn”t even get a buzz.” Most of the drinks were around $8, but a nice glass of wine or an after-dinner liqueur was more likely to be around $20.

We booked early, so the price of the whole cruise for our four-person family was about $4,000, a quarter of what it was for people who waited until a month or less before sailing. This bill added another grand to our total in the first three days! It could have even paid for another person’s cruise.

I tried to email some friends about this, but the Internet costs a dollar a minute. I waited in line to complain and overheard the woman in front of me trying to understand why she was charged a $15 corking fee every time she brought the $50 bottle of wine she”d purchased from them back to dinner. “I”ve spent more than half the price of the bottle on fees,” she said. As she left I tapped her on the shoulder and said, “You”re right” and she angrily said, “I know I”m right.” This was one of the few pleasant exchanges I had with another passenger.

The pools have to be small because a big pool would become a big wave when the boat rocks back and forth”which it does, a lot. The result is over 2,000 people clamoring around the one kiddie pool trying to grab one of the hundred deck chairs that surround it. By midday each pool is so packed they look like bags of Licorice Allsorts. The one hot tub on the boat is so jammed with people and steam, you expect to see a cannibal with a bone through his nose smacking his lips in anticipation.

If you don”t have a spot by 8:30 AM, your only hope is a deck chair up top, where the wind is strong enough to blow an apple out of your hand. We spent the first day there and it almost made me bald.

4. THE DISNEY CHARACTERS ARE CELEBRITIES

I had a pipe dream about making mini-movies where I take each character literally. I”d ask Cinderella for stain-removing tips because she”d done housework most of her life. I”d commiserate with Sleeping Beauty about those stupid bitches who blew her 16-year curse because they couldn”t keep their wands in their pants during the final hours. I”d complain that a man who has devoted his life to kidnapping children and robbing boats”Captain Hook”is on the payroll at all.

“The one hot tub on the boat is so jammed with people and steam, you expect to see a cannibal with a bone through his nose smacking his lips in anticipation.”

What I didn”t know is every character is mobbed like Jay-Z and BeyoncÃ© wandering through an all-black high school. They each have handlers and if you want to have your picture taken with them or get their autograph (yes, the children have autograph books) you had better be prepared to spend a half-hour waiting in a huge line. Once you get your picture done, simply go to the photo store and buy it for only $20. You can get a really nice frame for $100. If you aren”t into prints, why not get all your pics from the trip put on a CD for a trifling $400?

5. THE STAFF IS ANNOYING

Disney’s Human Resources Department seems to model the cruises” staff around a theme of “It’s a small world after all.” The waiters are from Turkey, the maids from Thailand, the doormen from Serbia, and the porters from St. Vincent. This seems like a nice idea and it’s a good counter to Walt’s embarrassing quote that hiring blacks would “have spoiled the illusion at Disneyland,” but it’s also depressing.

They”re so obsequious and insincere you feel like a robber baron who has offered to pull some lady’s kids out of poverty if she convincingly pretends to adore you for a week.

I spoke to some off-duty staffers from Scotland (one of the only countries with a GDP over $100M whose citizens I saw employed on the boat) at the bar. They had nicknamed the cruise “Boat Jail” and said they were expected to work at least 70 hours a week. We were out at sea amid maritime lawlessness, which may have explained all the Third World staffers better than any small-world utopian vision. Walt always hated the unions.