10 Reasons Why “Walk a Mile in Her Shoes” is Wrong 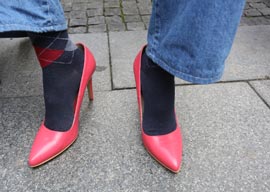 Every time I think the insanity meter on the political correctness machine has finally gone as far as it can go, the needle plunges deeper into the red. Last year, we assumed it was over when it was reduced to issuing a fatwa on the word “bossy.” Then, 2015 brought us passionate defenses of pedophilia and academics telling us it’s okay to murder babies. Now our soldiers are walking down the street in high heel shoes to “raise awareness” about how hard it is to be a woman. That’s right, the men committed to dying for their country are being paraded around in drag as punishment for their sexist existence.
The marches are called “Walk a Mile in Her Shoes” and purport to be about sexual violence but the big picture appears to be sexism in general. “It’s not supposed to represent anything specifically [sic]” says ROTC member Gerald Prater, “It’s just women in general.” Here are ten reasons why this is the most ridiculous move thus far.

1. IT MAKES US ANNOYED AT WOMEN
This ludicrous pantomime has already enraged everyone in the country with a brain, but the resentment isn”t directed at our military. It’s directed at the broad who came up with the idea (you know it wasn”t a dude). Like so many of these initiatives, it’s likely some meddlesome ratbag with a bee in her bonnet nagging her superiors to do something until eventually, they just say, “Fine!” and put the damn shoes on. The only thing this raises awareness about is what men will do to get women to stop arguing.

“Don”t think these guys are happy about being forced to dress in drag.”

2. IT MAKES OUR MILITARY, AND BY PROXY OUR ENTIRE COUNTRY, LOOK RIDICULOUS
Don”t think these guys are happy about being forced to dress in drag. They recognize it embarrasses the army and say it’s “the stupidest fucking thing I”ve done.” Hell, I didn”t even like it when women were featured on the posters for the military. I want the enemy to see huge guys with guns, not some shrinking violet in a knee-length skirt holding a clipboard like it could ever do any damage. I like the idea of ISIS getting bombed by female fighter pilots but only a sick society would think humiliating our soldiers sends a good message to the rest of the world. Now, when the enemy looks at our military they”ll see a bunch of weak beta males being used as Barbie dolls. Islam sees women as human garbage. This puts us below that. What a cruel and unusual punishment for a young man who may one day be in the Middle East fighting the most sexist culture in history.

3. MAKING POLITICAL STATEMENTS IS NOT A SOLDIER’s JOB
What’s next, making our officers carry a mattress around campus? It’s not their job to match their uniform with the latest political fad. Their job is the opposite of that. If we had political soldiers, every order would require a two-hour debate in the salon over some brandy. We don”t got time for that. A soldier follows his orders no matter how he feels about them. “Don”t rape” is already included in those orders by the way.

4. WEARING HIGH HEELS ISN”T THAT BAD
North Korean soldiers wear high heels all the time. They”re fine. I walked a mile in them once after losing a bet. They”re like a corset for your feet. Sure, things are pretty uncomfortable for the first ten minutes but you get used to it. You know what you don”t get used to? Seeing your buddy’s face get shot off mid-sentence while he was describing why his wife’s meat loaf is far superior to anything you could get at a restaurant. War is hell. Dressing up isn”t.

5. BEING A WOMAN ISN”T THAT BAD, EITHER
I don”t know where we get the idea that being a woman in America is some kind of living nightmare. Men are more likely to get assaulted or murdered or even sued. They”re more likely to commit suicide or get killed at work. They die younger. Virtually anything bad that can happen to a person happens more often to men. They even get raped more.

6. WOMEN CHOOSE TO WEAR THESE
One of the ASU participants said, “I definitely have a newfound respect for what women choose to go through.” This is America. If wearing something makes you uncomfortable, take it off. It’s not a burqa or a hijab. You don”t get twenty lashes if we catch you in flats. This is a free country. You”re welcome.