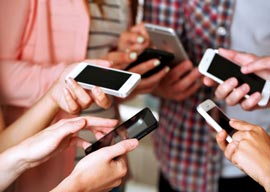 I was at the park with my daughter the other day and we started counting the people who were walking past while looking at their phones. The numbers skewed high because it was hipster Brooklyn and on a relatively empty street where pedestrians didn”t have to worry about collisions, but my God what a sight. Eight out of ten people were doing it. This includes a group of guys where several different members of the group were not engaged in the group’s conversation and were instead checking their phones while walking.

I hate these people and whenever I”m pushing a stroller I like to charge straight at them in a game of chicken they don”t know they”re playing. If I”m riding my bike, I like to go within a puppy hair of clipping them in a desperate attempt to scare them straight. If they”re crossing the street against the light and forcing me to slow my car, I can”t resist yelling, “Get off your fucking phone!” This is met with derision 100% of the time, though that might be a New York thing.

The most horrifying thing about this disturbing trend is I”m part of it. While my daughter and I were counting the phone walkers, I was trying to photograph them with my phone. I think I even tweeted about it. Sometimes, when my kids are doing something cute, I don”t notice because I”m looking at pictures of them on my phone.

I had some success with the #NoWanks movement and it’s time we applied the same logic to our addiction to social media. Here are ten ways you can attain #PhoneFreedom.

“Sometimes, when my kids are doing something cute, I don”t notice because I”m looking at pictures of them on my phone.”

(1) GET A SPONSOR
One of the reasons I”ve been so successful with #NoWanks is I can call the cofounder Dante Nero whenever I”m struggling or have passed a milestone. A brief “Don”t give up” response from an “It’s been almost two weeks” text is often all you need to keep your hands out of your pajamas.

It won”t be hard to find another phone zombie to join you on this quest, and he’s not just there for the bad times. When you accomplish something like drink three beers at a bar without checking your phone, let him know. You can do this the next time you”re at your computer catching up on your various tasks. As my colleague Scott Locklin says, “If there is something very important happening on the Internets, maybe you should stay home and use a real computer to find out about it.”

(2) TALK TO THE BARTENDER
Bar culture isn”t just about drinking alcohol. It’s a men’s club where we vent about the pressures of work and family. That’s why they have names such as Dad’s Change of Pace.

Today when I go to a bar, it’s not unusual for every single patron to be looking at his phone as the barmaid goes through hers. I do it too but I shamefully hide it under the bar. As Eric Garner said, “This ends today.” Ask the bartender how her love life is. Ask her why Fireballs are so popular and when that all started. Soon, another patron will chime in. Now we”re having a conversation. Now we”re getting our lives back. If nobody takes the bait, suck it up and stare. That’s what men have done in bars for centuries and it was a beautiful thing.

Also, if a friend keeps looking at his phone while you”re at the bar, discourage him with a gentle nudge like “Oh, we”re checking our phones now?” The next time he suggests you grab a beer say, “Not if you”re going to be checking your phone the whole time.” In AA, they discourage you from hanging around with “enablers.” We”re the same way.

Oh, and one more thing: If you”re on a date and she goes to the bathroom, do not pull out your phone. That says, “I”d rather be on social media,” and it’s insulting. We”re at the point where it’s unusual to see millennials on a date who are not checking their phones the whole time. Einstein warned us this would happen when he said, “I fear the day that technology will surpass our human interaction. The world will have a generation of idiots.”

(3) TEXT
If you think of something hilarious and you absolutely must get it down before you forget, ask yourself if a friend would enjoy this joke. Why entertain strangers when you can be fostering relationships with people who like you? Friends used to help us move or provide a shoulder to cry on or give good advice tailored to our personalities. Now we ask strangers to do the same things. That’s retarded. From now on, you may not tweet, Instagram, or Facebook anything that would be better suited to someone you know personally.

Texting is still using your phone, but it’s using it in a finite universe. Narrowing 7 billion people down to around ten is a good stepping-stone to a phone-free life.

(4) DOES THIS MOMENT MEET THE CRITERIA?
If you could possibly benefit from not using your phone, you may not use your phone. However, there are some occasions where we will allow it. If you”re a production assistant on a shoot, for example, you work in short bursts and are expected to sit quietly for a lot of ten-minute spans. That’s too short to get into a book, so fine, we”ll allow a scroll through some random garbage from strangers.

Another time your phone is helpful is commuting to work in a disgusting and loud city like New York. Listening to a podcast makes this bearable because the only thing you”re missing out on is suffering. Reading news articles during your commute is also allowed, though no phone calls on the train are permitted, ever.

(5) STOP MAKING EXCUSES
When addicts are confronted with rehab on the show Intervention, they always have some lame excuse for not going, like “What about Robert?” or “Who is going to pay my gas bill?” Robert’s the junkie who got you hooked and you haven”t paid your gas bill in months.

I find myself making excuses to myself like “I need to promote projects” or “I need it to take pics of the kids” or “What if I”m getting sued?” One social-media post per project is sufficient, we all have way too many pictures of our kids, and no emergency changes in a 24-hour time span.