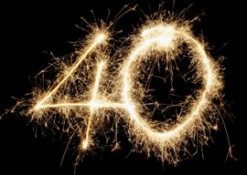 After 39 years of not being 40, I decided to give it a try. Being two score is unlike anything before it so I feel it would be prudent to warn you about a few things…

1) YOU DON”T CARE WHAT PEOPLE THINK
In my late 20s, I asked a cab driver what it was like to be 40 because that’s what he was. “It’s real mellow, buddy” he responded in his funny accent, “You don”t vorry so much.” As an angry young man, I had a lot of trouble understanding how you could not care what people think. “What if someone came up to your window right now and called you an ass?” I asked. “I vould say, “Oh my”” he said, “then vind up the vindow and drive off.” Before I could question his manhood, he added, “Now, if it vas ten or twenty years ago I vould get out of this cab and say, “vat did you say moderfocker?” and stuff like these—but now. Nothing. It’s not vorth it.” I finally get what he was talking about. I’m precious cargo. I can’t be jeopardizing my kid’s father just because some irrelevant psycho is in a bad mood. Sticks and stones still break your bones when you”re 40 but unless it’s a peer giving constructive criticism, you honestly don”t give a tenth of a pube what people think.

Moshing to Cerebral Ballzy at my 40th Birthday Party

Which brings me to another point. You become a lot less critical of other people’s work when you’ve actually done some of your own. Hey, Friends was on for 10 years. I never got a show on the air. Courtney Cox did all right. O.A.R. sound queer to me but they sell 80,000 tickets a night and I can’t even play the guitar. Good for them. Not to get all Baz Luhram on you, but: The more you accomplish, the less you trivialize other’s accomplishments.

More moshing dads. We had forgotten how exhausting it is and collapsed soon after.

2) URINATING IS WEIRD
Dostoevsky once said, “No matter how you shake your peg, the last wee drop runs down your leg.” You could helicopter-shake that thing with the centrifugal force of an astronaut initiation and—bloop—a yellow drop comes out the second you place it in your underwear. I”ve even tried faking it out and pretending I”m done shaking to see what happens but he waits until he’s positive there’s cotton there and then barfs out a drop. There’s a generation gap between you and your dink at this age and he will do everything in his power to thwart you.

For the most part, women and men separate at grown-up parties.

3) YOU NO LONGER HAVE GAME
I have ran into women that I used to defile (and I mean d-e-f-i-l-e) in my single days but when I talk to them now, I sound like the dude from The Wonder Years resisting the urge to flatulate. After you”re married, women become human beings for the first time ever and it’s like meeting another species. “Um, hello, do you like music?” You can try flirting but with nothing to back it up, you come across as a pugilist in a wheelchair.

This is the nature of marriage. In 1978, Lee Gratton told me, “When you get married you get to see your wife’s knockers whenever you want.” He was right. Only, they’re your best friend’s knockers. You don’t have any game when you’re married because you’re in a new universe of love and talking to your sexual alma mater feels like going to a preschool reunion.

4) NEWSPAPERS MAKE YOU FURIOUS
In your 20s, you have to force yourself to read the paper. In your 30s, it finally gets interesting and each article reads like your favorite book. By your 40s, you”re actually smarter and more experienced than most of the authors and you catch yourself crumpling the sides going, “Why are all these liars saying Mark Ruffalo’s terrible new show is so great? Just because there’s gays in it? What a bunch of ridiculous phonies.”

5) YOU CARE ABOUT YOUR LAWN
Bill Hicks has a bit where he says, “What is it about men where they wake up one day caring about their lawn?” Then he talks about dads walking around in a bathrobe yelling, “Who wants sausages? I”m makin” sausages for breakfast?” These quotes have gone from comedic banter to a documentary about my life. I care so much about my lawn, I wish it had a birthday so I could buy it presents. I even have dreams about the bald spots. Scotts EZ Seed is way better for patches than that stupid pulp they sell but if you”re in an area with a lot of pines, you”re going to have to lime the hell out of it before any seeding solutions—and do it in the fall so it gets soaked in as the snow melts. Hey, where’d everybody go?

6) CONSTRUCTION IS FASCINATING
What young men consider a noisy nuisance is a giant bowl of eye candy to a 40-year-old. “Oh they”re using those planks made out of recycled bags,” you think as you peer through the fence, “those are way too slippery for a deck.” You”ll also catch yourself worried about foundations and insulation and even asking carpenters what particular brand of thread lock they use.

7) COUNTRY MUSIC SOUNDS COOL
25 years ago, if you told me I”d get chills from hearing Willie Nelson and Toby Keith sing about feeding alcoholic beverages to their horses, I”d ask you what a time traveler is doing going to punk shows and talking to little kids. What used to sound like hillbillies yawning over unplugged guitars now sounds like a soothing pile of heartfelt stories I could listen to all night. I still like Southern rap and anarcho-punk but it’s now tempered with heaping portions of Merle Haggard.

8) HANGOVERS BECOME INTENSE
Forget foxholes. Try finding an atheist in an old man’s hangover. I have sat there with my head in the toilet for hours explaining to Jesus why I”ve never been to church and swearing to his dad I will start this Sunday. Cross my heart and literally hope to die because that would be an improvement over this parade of gut-wrenching, head-pounding, dry heaves. Here’s how 40-year-old hangovers usually go: When you wake up, it feels like a Transformer took a dump in your head. Then nausea grips your whole body like a barf snowsuit and your skin feels like a doctor accidentally gave an AIDS patient chemotherapy. This lasts, without respite, until you go to bed and is even kind of there the following morning. I would love to party as hard as I used to but Pavlov won”t allow it, so, that’s it. I didn”t quit drugs. Drugs quit me.

9) YOUR PERVERSIONS ADVANCE
As a fellow old person recently put it, “I went out with a girl who had droopy tits when I was 20 and I wasn”t into it but I sure wouldn”t mind messing with them right now!” For young men, it can be shocking to see how gigantic a woman’s ass gets in her 40s but when you get here you think, “More dessert please.” Queefs, butt hairs, blemishes and even those strange lady smells are all more grist for the mill and you finally understand why Napoleon forbade Josephine from showering the week before he got home. While this is happening, scantily-clad girls go from sluts you catcall to young ladies who had better get a coat on or they are going to catch the death of a cold.

10) THE PARTY’s OVER
Well, it’s not “over” per se. It’s just drastically different. With all due respect to doing coke in the basement of Lit with Paul Sevigny all night, that’s no longer my idea of a good time. I mean, it was real, it was fun, but it wasn”t real fun and although I wouldn”t trade those days for the world, I just traded them in for a whole new world. Honestly, if two decades of decadence doesn”t get your Ya Yas out, you have some serious emotional baggage.

Today, two-thirds of my roommates came out of my soulmate’s genitals and that means I feel a much stronger bond with them than someone with similar tattoos and the same taste in music. I still get high but it goes like this: Getting a drawing from my daughter feels like doing a bump. Hearing my son say “Take dat Beezo” after punching his Bozo Bop Bag makes me laugh like I just smoked a bowl. Having a toddler fall asleep on your chest feels like heroin. Seeing a little kid fly his first kite is as exciting as amphetamines, and building a Lego robot that takes all evening feels better than a Maker’s on the rocks next to a perfectly poured Guinness.

I”m not saying anyone should skip the party stage. It’s just that I”ve seen 15 friends live fast and die young because they took “I hope I die before I get old” more seriously than The Who. Hey dead guys, there’s a whole other universe out there after the party phase and it makes all the other phases look like they were just a phase. I’m pouring out some of my beer for you—but not too much.

A toast: To the bliss of matrimony and the joys of Fatherhood. Salut!