10 Things I Learned About the South 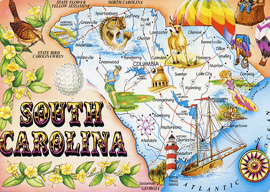 In 1831, Frenchman Alexis de Tocqueville came to America. Four years later, he published an outsider’s perspective of the culture that remained the gold standard for exactly 176 years. Time’s up, Alex. I”m an Englishman born to Scottish parents and raised in French Canada, and after four days in a tiny town called Abbeville, South Carolina, I am ready to update the Frenchman’s dated tome. Here are ten things I learned during my sojourn.

1. THEY”RE NOT RACIST
The outside world’s view of the South is that they”re a bunch of nigger-hating rednecks, but the climate there is more “Let’s agree to disagree” than “You”re wrong.” Blacks have their part of town and their barbershops, and so do the whites. I went to a black nightclub on the outskirts of town called The Peppermint which was an old barn with BBQ out back and was shocked to see blacks rolling joints at the bar like it ain”t no thang. When I asked about cops I was told none had ever been there.

2. OLD GUYS WEAR BELTS AND SUSPENDERS
This seems idiotic at first glance but I tried it and it really works. Suspenders keep your pants up, but they do it by tugging on four parts of your waistline like a pesky puppeteer. The belt acts as a Robin Hood device by equally distributing the suspender’s pull throughout your entire pant top, keeping them comfortably above the waist with no questions asked. If only someone would teach America’s youth this handy trick.

3. THEY HATE SWEARING
Holy fucking shit do these motherfuckers swear up and down that they don”t like swearing. Any time I wanted to get a conversation going I”d bring up the topic and the other person would come to life like I”d put a quarter in them. “I do it,” they”d usually start with, “but I ain”t proud of it. And I tell my kids that it ain”t right. It’s very important the kids know that cussing is wrong.” I once had this conversation at a bar with a NO SWEARING sign so big, it almost gave me Tourette’s.

“Nobody cares who the mayor is, but the high-school football coach is treated like royalty.”

4. CHEATING IS A HUGE DEAL
In Italy and France, cheating on your spouse is about as serious as farting on a plane. Ask a Frenchman why he did it and he”ll say, “Well, ma wife, she did not want to feck so I feck someone else. Dis is logical, no?” In South Carolina it’s illegal to break up a marriage by fornicating. One mom said to me she was impressed I kept my wedding ring on while traveling. “That’s very noble,” she said. “Most men wouldn”t do that.” I gave up trying to feck her after that.

5. EVERYONE GOES TO CHURCH
When you”re ingratiating yourself with people they seem to have this “Talk is cheap” attitude and refuse to take you seriously until you show up at their church on Sunday. I never went because I”m disingenuous. Turns out their screening process works.

6. THEY”LL GIVE YOU THE SHIRT OFF THEIR BACK
There’s one caveat for their unique generosity: You can”t act like you”re better than them. If you”re here from New York to talk about the racist backwards yokels, you better have a getaway car waiting outside. Once you”ve shown some reverence for their culture and some interest in their lives, they have no problem if you walk over to their fridge and fix yourself a sandwich. In fact, they get pissed if you don”t eat.