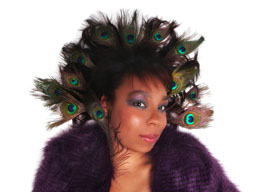 They say the North likes blacks in theory but not in practice, while the South likes blacks in practice but not in theory. I think I”m a Southerner at heart, which makes sense. In Black Rednecks and White Liberals, Thomas Sowell blames us Scotch-Irish for ghetto culture. I don”t really like what I see on the news these days, in theory. Two murders a day on the South Side of Chicago seems excessive. I didn”t enjoy seeing a mentally handicapped Trump supporter get tortured by black teenagers, but most blacks didn”t enjoy that either. In practice, I like black people for at least ten reasons.

(1) THEY”RE HAPPY TO HAVE A DIRTY CONVERSATION AT ANY TIME
I went to a kids” party once where they were screening a movie outdoors by projecting it onto a wall. The white dads took off their shoes (all beta dads wear kookily colored socks) and snuggled next to their boys to watch the movie. I didn”t understand why these dads wouldn”t want to take advantage of 100 minutes of free time, so I walked over to the foldout booze table where the non-snuggly dads were. There were only three and they were all black and we talked about seducing our wives and various techniques we use to get them into bed. One told me he has a box of various toys and outfits he keeps locked under the bed. I thought this was a brilliant idea and left the party enriched.

(2) THEY THINK FASTER THAN US, WHICH MAKES RAP SOUND INTERESTING
Race and IQ is the ultimate taboo when it comes to any discussion involving black people. I”m not sure why. There is tons of overlap with the bell curve diagram wherein hundreds of thousands of blacks are smarter than hundreds of thousands of Asians. That means the data is only relevant when looking at the group as a whole and must be ignored on a one-on-one basis (something Murray and Herrnstein made very clear in the intro). The other thing that doesn”t really come into play with these tests is the speed at which black people think. This is a trait Intelligence and How to Get It calls “movement time.” It’s a trait that is especially evident in rap music, which is why you can hear a man quickly blurt out,

Sorry, but that’s interesting. If you think it’s easy, give it a whirl.

“Black church looks like an ostentation of peacocks broke into a paint factory.”

(3) THEY MAKE THEIR OWN CUSTOMS AND THEIR FOOD IS DELICIOUS
Speaking of strange customs, what the hell are chitlins? It’s amazing that a people can be here for hundreds of years and develop customs totally separate from the other 76 percent of the country. They”re like Hasids in that way. They”ve developed their own accents, language, dances, music, and yes, food. Soul food is a deep-fried and delicious style of cuisine that I lost thousands of dollars trying to emulate at my failed restaurant on Manhattan’s East Side.

(4) THEY CARE ABOUT FASHION”A LOT
British people understand the importance of fashion, but American men see it as some kind of gay sellout. Flip-flops and Under Armour are the uniform for most states and it makes the entire country look like a sleepover.

Black men of any age are similar to Brits in that they see the importance of putting a good outfit together. “Ghetto matching” is the concept of matching a baby blue baseball hat with brand-new Air Jordans that are the exact same hue. Even black geriatrics will have alligator shoes with a cane and a straw fedora that complements the whole thing perfectly. To most Americans, going to church entails maybe putting a blazer on. Black church looks like an ostentation of peacocks broke into a paint factory.

(5) THEY INVENT THEIR OWN ANARCHIST SYSTEMS LIKE “SUSUS”
I can”t get a confirmation on the spelling, but a susu is a fund where poor blacks in Brooklyn will pitch in $100 a week for thirty weeks and cash in $2,900 whenever they want, once (the guy who collects the money takes a $100 cut). Joining one of these is taken very seriously and not making your payment is simply not done. If you try to default, you will get pounded. It’s an anarchist system where people with bad credit and poor discipline have figured out a way to go around the banks and provide themselves with enough cash for a lavish vacation.

(6) THEY DON”T CALL THE POLICE
Speaking of anarchy, we are living in an epoch of excessive police calling. When I was a boy, you only called the police if someone robbed your home. My dad got into a half-hour fistfight with a guy he caught leaving dog shit on the grass. It would never occur to either man to call the police or sue or any of that faggy stuff. Today, every single confrontation gets screams of “That’s assault!” and a demand that the police begin filling out tedious paperwork. This is especially true at demonstrations, where rich white kids who call themselves anarchists randomly attack anyone they deem a fascist.

Black people handle they business, even when they catch a guy trying to pick their lock and even when that guy claims he was merely practicing lock picking so he could fix his own door.

(7) THEY HAVE A SENSE OF BROTHERHOOD THAT OVERRIDES CLASS AND GEOGRAPHY
Big-breasted blogger Zoie Burgher was recently kicked out of the CNN building for filming there without permission. She understood this was inevitable, but what really angered her is how differently the black guy next to her was treated. They told her to get lost, but they called the black guy “brother.” I could care less about how she was treated, but I couldn”t help but feel a little envy when I heard her story. Can you imagine a group of black people you were with being asked to leave an establishment and the white security guard calling you “brother” in the process? I don”t want to turn this list into a compendium of white failures, but it would be nice if we didn”t hate each other so much. Even when I lived in Taiwan and I”d see maybe one other white person a day, we didn”t call each other “brother” or even nod. In fact, there was resentment from the other whites because your existence made them less unique.