10 Unbelievable Things I Was Taught in College 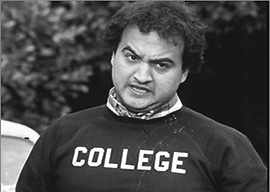 It used to be a big deal to have a college education. Back in 1960, about 8% of the population had one, and this chosen few deserved their popularity in the job market. The baby boomers decided this was unfair, so when they seized control of education in the 70s and 80s, they removed all the hard parts and rewarded themselves handsomely in the process.

Today, nearly four times as many Americans have degrees, despite students being expected to shell out upwards of $120,000 for a Mickey Mouse diploma that is totally useless in the real world. If you went to art school in the 1950s, you graduated knowing how to do photorealism with oils. If you got your art-school diploma last year, you graduated knowing how to put a tampon in a teacup. When education allows dissertations on Lord of the Rings, we end up with a culture where The New York Times sees nothing wrong with telling us to think of sanctuary cities as “where Keanu Reeves was trying to get to in “The Matrix”.”

How did we get here? Because people who say the following things are in charge of our education:

In an American Literature class, the professor told us The Sun Also Rises was boring on purpose. Apparently, Hemingway was trying to capture Europe’s useless frivolity from the 1920s”or something. I had read elsewhere that Hemingway loved every minute of his time over there, and when I said as much the teacher replied, “In this class we go through the author’s intentions and into what the book actually was.”

What I learned: Hemingway should have taken a Hemingway class.

With the death of math came the arrogance of liberal arts. Suddenly, sociology professors were telling students about complex astronomy as if it was all common sense. In attempting to prove we are all the same, a professor uttered the above quote. I think she was headed for “Humans are all 62% water” and took a sharp left turn at “I have no idea what the fuck I”m talking about.” As she rambled on, the rest of us sat back in our chairs and wondered things such as, “Wait, isn”t the universe 99.999% nothingness?”

What I learned: “Water” is loosely defined and can include gas, solids, and antimatter.

Though I received a BA in English, I took a lot of math courses in college because it made my parents happy. These classes were rational for the most part, but one time our professor went off on a tangent about how we don”t exist.

He told us that when something is infinitely small it is the mathematical equivalent to zero. When compared to the ever-expanding universe, he said we are infinitely small. Therefore, we don”t exist.

What I learned: The nine senses that insist we exist are full of shit.

4. OF COURSE, THIS IS ALL DONE WITH LASERS NOW; BACK THEN ALL WE HAD WAS A CATHODE RAY TUBE

This is the ONLY sentence I understood in a Philosophy of Science class where the professor mumbled unintelligibly like Uncle Monty for hours at a time.

My dad has a degree in physics, and when I showed him some of our assignments he ran to the Dean in a rage, only to discover the senile old coot had created an impenetrable force field of tenure for himself and his entire department. “There’s not much I can do about that, Mr. McInnes,” the Dean told my old man. “It’s the Flat Earth Society over there.”

“With the death of math came the arrogance of liberal arts.”

What I learned: Professors are always right and cannot be challenged by anyone, including their boss.

In a Philosophy of Feminism class (I know, I know) a young girl had the gall to put up her hand and say she grew up with six male siblings and never saw any kind of latent misogyny lurking around the male brain. Other students seemed excited about this idea and one asked, “If women do the same work for less money, why wouldn”t corporations hire them exclusively?”

The professor rolled his (yes, “his”) eyes and told us, “If you don”t accept that women are systematically and seriously oppressed in this society, you cannot be in this class.” The debate ended there.

What I learned: Women don”t choose the lives they lead and if they say they do, they”ve been brainwashed.