10 Weird and Wonderful Things About Living Among Hasidic Jews 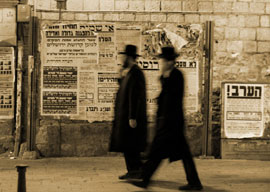 Unite the Beards is a new and remarkably naÃ¯ve organization that wants to bring hipsters and Hasidic Jews together. They”re based here in Williamsburg, Brooklyn, where the Hasidic community has made it very clear they hate hipsters way more than everybody else does. Before moving to this area 13 years ago, I lived in Montreal, which is also lousy with Hasidim. I have a place upstate, too, which is probably #3 as far as densest Hasidic populations go.

After a good 25 years of being surrounded by them, I still don”t know the first thing about them. This is primarily because they”ve decided isolationism is the key to cultural preservation.

I”m of two minds about this. On the one hand I think, “Fuck you for not wanting to hang out,” but on the other hand, you have to admire a culture that can remain virtually untouched for over 300 years. It’s like Quebec. You hate them for enforcing their draconian language laws, but you admire them for resisting the Disneyfication of North America. People are baffled by the French Canadian accent, but it’s how most rural French people spoke hundreds of years ago.

I can”t tell you what Hasidic Jews are like or even if I like them, but I can tell you what it’s like to be around them. Here are 10 things I”ve noticed over the past quarter-century.

1. THEY HATE HIPSTERS
Orthodox landlords have begun renting to hipsters because it pays, but the Hasidim are pissed. They see this as an invasion and in a sense, they”re right. The Amish do well with Rumspringa because it’s not on their turf and it’s only two years. If you had chicks who dress like they”re in a ZZ Top video living in an Amish community, Rumspringa would quickly become a permanent RumSCHWINGa and the Amish would be done.

“Hasidim are not known for their driving skills and I think it’s because they trust God a little too much.”

2. NO, THEY REALLY HATE HIPSTERS
The Great Bike Lanes War of Williamsburg has been raging since at least 2009. Hot girls on bikes ride through Hasidic communities flaunting their blasphemously saucy legs and ungodly cleavage. The Hasidim retaliated by painting over the bike lanes and the hipsters fought back by painting them on again. The Hasidim got the city involved and the hipsters fought back by having a topless bicycle parade. When Mayor Bloomberg told the Hasidim to get with the program, they pointed out that it’s almost election time and they hold a huge sway over who gets elected. The bike lanes were gone the next day.

That doesn”t mean the beef isn”t still on. Just last week a female friend sent me this video of a van full of Hasidim attacking a cyclist for riding through their neighborhood.

We didn”t have this kind of conflict in Montreal. Up there the Hasidim just make the most delicious bagels in the universe and leave everybody alone. Maybe women in New York are just sexier?

3. THEY CAN”T TOUCH WOMEN
I”m not bananas about menstrual blood, but my experience has been that most women wash their hands after inserting a tampon. If a woman wants to give a Hasidic guy change at his photography store, she has to kind of lob it at his hand. This isn”t usually a problem because Hasidim have developed almost freakishly good catching skills.

One of the more amusing side effects of this rule is when newbies accidentally touch them. I”ve seen girls pull back their arm and apologize before realizing, “Wait, why am I apologizing for violating your stupid rule?”

On the less amusing side, we have their total incompatibility with the modern world. While working at a high-tech firm’s marketing department, a colleague of mine and his female coworker were asked to conduct a job interview with a Hasid. Now, I don”t know if you”ve been out there in the real world but the vast majority of clients accepting your bids are women. Sure, the top brass is male but they don”t sully themselves with the day-to-day. I”m told we live in a patriarchy but all me and my peers see are cougars and if we don”t make them happy, we”re out of a job (yes, that has included sex).

Anyhoo, during the interview the female coworker puts out her hand and the Hasid yanks it back while apologizing for this ancient law. They continued with the interview knowing there is no way in Hades they could hire this guy. How are you supposed to schmooze a nation of cougars when you can”t even shake their hands? Of course, they couldn”t say any of this so they made up some excuse not to hire him and vowed to never tell a soul about this, except me, years later, anonymously.

4. THEY CAN”T TOUCH WHORES?
I wouldn”t believe this if I didn”t see it with my own eyes. When I first moved to Williamsburg, it was known more for crackheads than hipsters and I could see the most disgusting whores I”d ever seen from my office window. They didn”t even try. They”d have on one Ugg boot and a slipper and a sideways baseball hat that had puke on it and they”d write odes to state-confiscated children in our hallway that said, “Mami misses you my angels. Come home soon.”

I asked an Orthodox Jewess what this was all about and she said some of them don”t see goyim as human so it was about as sinful as using a blow-up doll. I still don”t get how that doesn”t constitute touching. Maybe if women wore condoms on their hands, they could do more business in the Hasidic community?

5. THEY MIGHT POSSIBLY HAVE A MINOR PROBLEM WITH INBREEDING
I know a guy who works at Mount Sinai and he told me the genetics-treatment center contains a wildly disproportionate number of Hasidic Jews. In fact, they have their own Genetics Disease Center. This may have to do with marrying close to one’s family. Or it may not. You know what? I”m just going to drop this and move on.