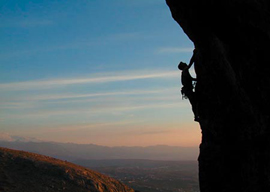 While 127 Hours is shorter, slighter, and more upbeat, both films are deftly made reconstructions of famous 2003 events within young elite subcultures: Harvard undergrad Mark Zuckerberg founding Facebook and alpinist Aron Ralston walking away from a solo canyoneering accident by amputating his own arm.

Both movies overcome their inherently static situations through showbiz razzmatazz. Aaron Sorkin enlivens a story of typing and giving depositions with snappy dialogue. Boyle employs flashbacks, hallucinations, alternative endings, and his zap-pow digital cinematography to juice up the tale of a man, his hand wedged to a canyon wall by a fallen boulder, contemplating his options. Namely, these options are: somehow survive in a crack in the Utah desert on a liter of water until somebody stumbles upon him; rig a pulley to lift the 800-pound rock; chip the boulder away; perform surgery on himself with a dull knife; or die.

In contrast to the frenetic Slumdog, Boyle offers viewers time to think along with his hero by spreading out Ralston’s discoveries of his options. In truth, Ralston, a mechanical engineer from Carnegie Mellon who”d quit Intel to concentrate on climbing, identified all his possibilities within an hour after his fall. Getting audiences to like the real Ralston’s combination of cold-blooded rationality and recklessness, however, is a more complicated challenge than Boyle chooses to accept.

“Both The Social Network and 127 Hours leave you wondering whether the middle-aged filmmakers, despite their undeniable expertise, truly understand their young subjects.”

(In case you are worrying, no, the hero doesn”t spend all 127 hours sawing off his arm. While that took Ralston an hour, Boyle compresses the auto-surgery down to a couple of minutes, with his camera mostly on James Franco’s expressive face.)

Both The Social Network and 127 Hours leave you wondering whether the middle-aged filmmakers, despite their undeniable expertise, truly understand their young subjects. For example, both films” inspirations are more conventionally handsome than the movie stars who portray them. Franco (the kind-hearted dope dealer in Pineapple Express) looks weedy compared to the rugged-jawed Ralston. Boyle’s harsh digital colors and need to shoot with wide-angle lenses in the soundstage mockup of the four-foot-wide canyon slot leaves poor Franco looking pop-eyed and sallow.

These casting choices enable the filmmakers to manipulate audience reactions. The Social Network portrays Zuckerberg as a lonely, angry nerd, even though he strikes programmers and venture capitalists as a natural leader of men. Last week, for example, Google granted all its employees pay raises to keep them from defecting to Team Zuckerberg.