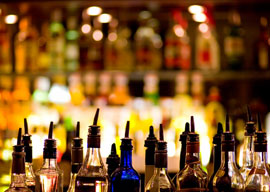 7. NO THREE IN A ROW
If three guys are going for a drink, two may sit and the other must stand between them, creating a triangle of conversation. When three guys sit in a row at the bar, one is forced to crane his neck to hear what’s going on and another often has his back to a dude. You”ve been sitting at a computer all day. You can stand for a couple hours.

9. MEN SHOULD NOT ORDER WINE
Today I saw a dude drinking a wine and a water. He might as well have been raping a baby and holding a Klan rally. Wine is for dinner parties and women and fancy restaurants. Pubs are places where Robin Hood’s merry men get wasted and fight. You can”t do that while holding a glass stem in your hand like it’s a goddamned rose.

10. STOP SHOWING THE BARTENDER PICTURES OF YOUR KIDS
Every time I go on a business trip, the hotel bar is crammed with dads showing the spinster bartender a picture of their kids. She doesn”t give a shit, dude. In fact, you”re depressing her because her roadie boyfriend is never going to be a dad. If you”re so drunk that you think everything you find interesting is also interesting to us, you need to go up to your room and sleep it off.

11. SLURRING IS A SERIOUS ACCUSATION
If your buddy says you”re slurring, you are. The only way to tell when someone is wasted beyond a shadow of a doubt is when they adamantly deny it. The second someone mocks your slurred speech, try to take it down a notch. Also, here’s a bonus tip: If you”re about to meet your wife or a business associate and you”ve had too much, stretch your cheeks by inflating air in them. I don”t know why this works, but it does.

12. DON”T ASK IF YOU CAN CHARGE YOUR PHONE
Asking a bartender to charge your phone is like asking him to change your diapers. If you”re in a situation where your battery keeps cutting out, get a Morphie. If not, let your phone die. Bars lived without cell phones for thousands of years and they should continue to do so for thousands more.