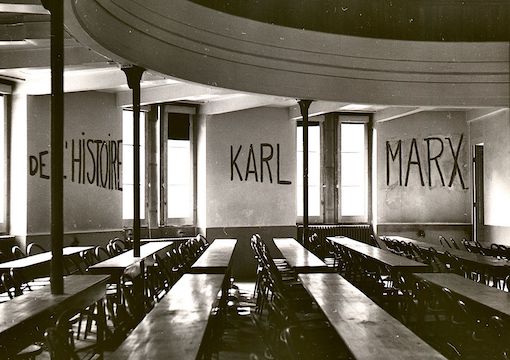 I have never been quite able to make up my mind whether there is no new thing under the sun or whether we live in completely unprecedented times. When we look at events close up and nearby in time and place, we are inclined to think that nothing like them has ever happened before; but with the passage of time, and a little calm reflection, we find analogies all over the place. I suppose the wise man is alive to both the similarities and the differences, but keeping both in mind at the same time is hard, like trying to see the old crones and the candlestick simultaneously in the famous diagram beloved of gestalt psychologists.

In light of the recent events in the United States and elsewhere (the elsewhere that has long imitated the United States in completely decerebrate fashion, while at the same time being anti-American), I flicked through a large picture book of May 1968 in Paris, the upheaval of spoilt brats, by spoilt brats, for spoilt brats. I hesitate to quote Georges Marchais, the leader of the Stalinist French Communist Party of the time, who was not in favor of the upheaval, but who said, with some prescience:

In general, it’s all about the sons of the haute-bourgeoisie who, disdaining the students of working-class background, will soon extinguish their “revolutionary flame” in order to go and manage Papa’s companies and exploit the workers in the best traditions of capitalism.

Spot-on, Georges, if one goes a little less hard on the poor capitalists and includes in the stricture the former Maoists who later joined the upper echelons of the French state apparatus!

Another Georges, this time the soon-to-be president of France, Pompidou, said something pertinent in the French National Assembly in the middle of May 1968:

At this stage, it is, believe me, no longer the government that is in question, nor the institutions, nor even France, it is our civilization itself.

One can’t help thinking that good old Georges was onto something, even if, in the 52 years that have so far elapsed since then, I have personally managed, as have millions of others, to lead a perfectly satisfactory and even fulfilling life, as no doubt did many Romans in the run-up to the collapse of the empire.

“Bogusness is a permanent temptation in political life.”

What is quite clear from the photographs is that the students who made a mess of Paris and threw up barricades that made the streets of the City of Light look temporarily like those of Port-au-Prince (where disposal of garbage is not very well-organized, if I recall correctly) were far from the horny-handed sons of labor. On the contrary, they were clearly the children of the bourgeoisie, and could not hide the fact, however casually (for the time) they dressed. Social class does not spare physiognomy in its effects, any more than it spares longevity.

The students obviously liked to make a mess; it was, so to speak, their natural milieu, as maggots like carcasses. When, occupying offices, they put their feet up on the antique desks of authority that they were soon to sit behind, they thought that they were being revolutionary rather than merely savage and insolent. They were privileged, but not privileged enough in their own estimation. They were earnest, but not serious; and earnestness combined with frivolity and armor-plated self-righteousness is not very attractive. Evidently, however, earnest frivolity is a permanent temptation of youth, which does not yet appreciate that deterioration as well as improvement is possible.

One reads the words of Daniel Cohn-Bendit, the student revolutionary and narcissistic apologist for pedophilia, who managed afterward to carve out a lucrative career for himself, with a certain rage:

The French flag is made to be torn up and to be transformed into the Red Flag.

Did he have any understanding of what he was saying or knowledge of what he was advocating? Did he, in fact, care? I think not. What he cared about was cutting a figure in public. Let the heavens fall, so long as I am in the newspapers, might have been his mission statement.

Of course, bogusness is a permanent temptation in political life. There is a wonderful photograph of the deputies to the French National Assembly in 1968 having a physical brawl, with punches thrown. Every onlooker, except two, appears concerned by the brawl, but one of the two sits with his arms folded, his expression that of contempt, while the other, actually Pierre Mendès France (though a French friend said he thought it was Roland Dumas, another experienced Machiavellian politician), smiles wickedly as if, having seen a great deal in his life (for example, having been imprisoned under Vichy and having escaped to England during the war, as well as having been twice prime minister), he knew playacting when he saw it.

There has always been playacting in political life, with simulation of strong emotions for their own sake, and so forth. There seem to be periods when these phenomena are at a minimum, as there are periods when they are at a maximum. Not every manifestation of mass feeling is bogus, of course: The million who turned out in May 1968 in support of de Gaulle and against the students were sincere enough (not that sincerity by itself is more than a necessary condition of political virtue, and certainly not a sufficient condition). But the temptation to act more passionately than one feels, and to pretend to believe strongly in principles of no conceivable application—for example, the May 1968 slogan that “It is forbidden to forbid”—is a recurrent one.

I don’t believe in cycles of history, let alone eternal recurrences, but some things really do change. For example, both Pompidou and the much younger Jacques Chirac, as well as many others, including demonstrators, have cigarettes in their mouths. Surely it is time for these shocking scenes to be photoshopped, so that they may not corrupt any youth who happens upon them? If two future Presidents of the Republic are portrayed with cigarettes sticking to their lower lips, who can say how many will die as a result of imitating them? It is high time that history were more carefully edited for the sake of public health.