Is There a Vaccine for Vaccine-Haters? 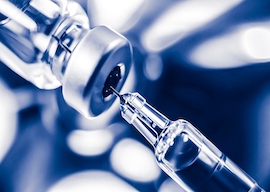 NASHVILLE—If you go to Trenton, the capital of New Jersey, and you look around the streets behind the Capitol, you might stumble upon a curious little museum called the Old Barracks. It’s one of those quaint historical learning centers where all the docents are dressed up like British soldiers (because it was originally a British barracks) and Continental Army soldiers (because George Washington took it away from the Brits) and nurses.

The reason I mention the nurses is that for many years the Old Barracks was used as a smallpox hospital. In fact, the pox was one of the chief enemies of the Continentals, because the enemy was immune to it. It was brought to North America by soldiers who had been living in countries where it had already wiped out 10 percent of the population, so most of them had developed a resistance. There were even rumors that the British Army had a diabolical plan to intentionally infect the Americans, and the soldiers took these rumors so seriously that many of them would inoculate themselves. Inoculation—intentionally giving yourself a mild case of the disease and becoming very sick for several weeks—would give you a 98 percent chance of survival. If you waited and got the disease the old-fashioned way, by coming in contact with a carrier, the chances were one in three that you would die.

It was against military regulations to inoculate yourself—because while you were going through the weeks of recovery, you could transmit the disease, and it made you so weak that you were unfit for duty. George Washington believed his army would eventually have to be inoculated, however, partly because he had been ravaged by smallpox himself. (His portrait painters kindly omitted the numerous pockmarks on his face.) Since he was always outmanned by the enemy, he just had to be careful about how many soldiers were in rehab at any given time.

My point is that the tour guide who gives the little lecture about smallpox uses some clay disks that show exactly what human skin looks like at various stages of smallpox—and they’re so gross that, if you’ve only considered smallpox in the abstract, you realize for the first time that it was on a par with leprosy when it comes to how badly it could mess you up. Even if you survived it, like George Washington, you were deformed for the rest of your life.

“There’s always a Village Idiot who believes the vaccine is harmful. He endangers the rest of the village.”

That’s why, when the British physician Edward Jenner developed the first smallpox vaccine in 1796, he eliminated a scourge from the earth. Jenner’s big discovery was that you didn’t have to use inoculation—you could use extremely small doses of a milder but similar disease, cowpox, to create total immunity against the more serious one.

It was the first vaccine. There were a few skeptics, but for the most part, the world said hallelujah. Even to this day, there are statues and busts and permanent tributes to Jenner all over England. At Dr. Jenner’s house, in Berkeley, they’ve even preserved the horns of Blossom, the infected cow used to make the first crude vaccines.

Okay, here’s the bad news. Smallpox was eradicated from the planet, but not until 1979. That’s how long it takes to get everybody vaccinated in every country even when we all agree it’s a good thing. Polio, malaria, hookworm, measles, rubella have all been almost eradicated. But they keep coming back because of the Village Idiot Factor.

There’s always a Village Idiot who believes the vaccine is harmful. He endangers the rest of the village.

And he won’t shut up.

If you do just a cursory search of vaccine conspiracy theories on the web, you will find the following:

(1) The flu shot causes cancer.
(2) The flu shot causes lupus.
(3) The flu shot causes multiple sclerosis.
(4) The flu shot causes dystonia.
(5) The flu shot causes paralysis.
(6) The flu shot causes autism.
(7) The flu shot causes Guillain-Barre Syndrome.
(8) The vaccines we’re being forced to take in America are so dangerous that they’ve been banned in multiple foreign countries.
(9) The developers of the vaccines refuse to take the vaccines themselves.
(10) Thiomersal, which is used as a preservative in many vaccines, contains mercury, which causes a multitude of diseases.
(11) Vaccines are unnatural and are actually toxic to the body.
(12) Vaccines don’t work.
(13) The diseases prevented by vaccines aren’t that bad anyway.
(14) Requiring vaccinations is an abridgment of our freedoms.
(15) Vaccinations are Big Government interfering with our lives.
(16) Vaccinations are socialized medicine infiltrating our private medical system.
(17) Vaccines artificially interfere with what the body can take care of naturally.
(18) Andrew Wakefield was right. The measles vaccine causes autism.
(19) Every year they do new studies proving that vaccines are safe. This proves they’re scared. Why would they keep doing studies if they believe they’re safe?
(20) The two drops of polio vaccine given to infants cause impotence and diarrhea.
(21) The polio vaccine is a conspiracy by the United States to kill African Muslims.
(22) Celebrities know things they don’t tell the general public, so we should listen to Michele Bachmann, Adam Baldwin, Toni Braxton, Jim Carrey, Robert De Niro, Alex Jones, Robert F. Kennedy Jr., Bill Maher, Jenny McCarthy, Aidan Quinn, Rob Schneider, and Alicia Silverstone, all of whom believe that vaccinations are harmful.
(23) The celebrities are joined by Boko Haram, the Taliban, the Christian Science movement, and various writers for the Huffington Post.
(24) Aluminum in the vaccines deposits in the brain, causing autism.
(25) Aborted fetuses are used as ingredients in vaccines.
(26) Gelatin derived from pigs is the ingredient in the vaccine that nefarious secret societies want us to ingest.
(27) The DTaP vaccine for diphtheria, tetanus, and whooping cough causes Sudden Infant Death Syndrome.
(28) Shaken Baby Syndrome is caused by childhood vaccinations.
(29) “Vaccinosis” is a condition described by scientists in which the body is weakened by too many vaccines.
(30) Vaccinations overwhelm the developing immune systems of children. Their immune systems get “used up.”
(31) Breastfeeding reduces the effect of vaccines.
(32) Vaccinations cause seizures.
(33) The only purpose of vaccines is to create a major source of revenue for Big Pharma.
(34) Gardasil, which prevents cervical cancer when administered to young girls, is an attempt by government and liberal elites to encourage underage females to be promiscuous.
(35) People who rely on the goodness of God rather than modern medicine have a lower rate of disease.
(36) Liberal elites use vaccinations as a way to control the population.
(37) Vaccinations are unconstitutional because the state doesn’t own your body.
(38) The elimination of diseases has nothing to do with vaccines. Diseases go away because of better sanitation.
(39) Natural infection is better than vaccination. Childhood diseases can be fun, especially when you have neighborhood “pox parties.”
(40) Your dog or cat can become autistic if given a vaccine.

I would call your attention to two things about this list.

Numero Two-o: The reason people in 1796 would universally welcome a vaccine and the people of 2019 would be skeptical of it is that people in the first group all knew someone who had been killed or permanently maimed by the disease. The people in 2019 feel bulletproof.

To use one example, when Dr. Jonas Salk developed the first vaccine for polio, the nation had a Vaccination Day when everyone went down to the local high school and ingested a sugar cube.

Well, everyone except me and people like me. We were already immune.

You wouldn’t want your family member or your own body to become immune the way we did. If you had any doubts about vaccines, but you witnessed the treatment of someone like me, your Village Idiot DNA would vanish right away.