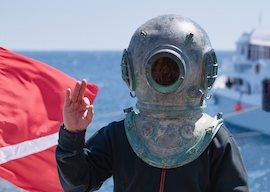 I’ve never done an honest day’s work in my long and useless life, so it is acutely annoying when people brag about the horrible jobs they had when they were young.

If I had been forced to work at McDonald’s, mow lawns, or be a bicycle messenger, I would keep that shameful secret to myself. But many of my contemporaries—now that they are comfortable—boast about their menial labors ad nauseam.

They think it gives them bona fides as self-made successes who pulled themselves up by their bootstraps, willing to suffer all sorts of indignities on their way up—as if the crappy jobs they had as teenagers make them deserving of the cushy, overcompensated jobs they have now.

Bartending and waiting tables are too lucrative, and too painless, to even mention.

“The worst job I ever had was frying doughnuts,” an old friend likes to tell people. “It was midnight until eight in the morning, and I couldn’t even take a smoke break. When I wasn’t frying, the owner would hand me a mop.”

My sleep-deprived pal was in college at the time and had to go straight to class reeking of doughnut grease.

One night, as he was carrying a tray of glazed doughnuts to the cooling rack, he actually fell asleep standing up, like a horse. All for $2 an hour, no benefits.

“I suppose such employment builds character. But some people think I have too much character already.”

“The good part about it is, after that, every job I had was an improvement,” my friend says. “Nothing could ever be that bad again.”

I can’t contribute to the blue-collar bragfest because I’ve never had to work, and never wanted to. That’s why God invented trust funds.

The only job I ever had during vacations from Choate was summer camp counselor. The Adirondacks are beautiful and the campers weren’t too horrible, and there was waterskiing with the director’s daughter. We called her Princess Potawatomi for some reason. She looked pretty great in a bikini, especially when she bent over to hand me the towrope.

Then, at Yale, as my classmates’ fathers arranged internships for their sons at white shoe law firms and investment banks, I kept my summers free for sailing regattas and tennis at the country club, rehydrating with South Sides at the pool between sets.

A true aristocrat is too busy managing the family fortune and collecting rent from his tenant farmers to have a real job.

In the U.K., a citizen can have his occupation listed on his passport as “Gentleman,” but only if he can prove he has no gainful employment. At least that’s the way it was.

These days, we worry about white privilege, and boast of the days we drove a taxi or rebuilt chimneys.

“I once ended up in Alaska diving for sea urchins,” John the artist says. He describes the rubberized suit with the kind of metal-and-glass helmet Kirk Douglas wore in 20,000 Leagues Under the Sea.

The suit had boots weighted with lead to keep him on the bottom, and an air hose to the boat above so he could breathe.

John would walk around filling up mesh bags with sea urchins that would soon be eaten raw in Japan as uni.

“That’s nothing. I once had to move a dead cow,” says Colin the advertising exec. “I was living upstate, and my neighbor asked me for help because he had a dead cow in his barn that had to be buried, and I had a pick-up truck. The only way to remove it was to tie a rope around its legs and tow it out with the truck.”

The only dead cow I ever want to see will be on my plate medium rare.

I suppose such employment builds character. But some people think I have too much character already.

I’m happy I missed the minimum-wage chapter of life—though I don’t have anything to say when my friends one-up each other with their tales of woe. Some even call me a snob. Guilty as charged.