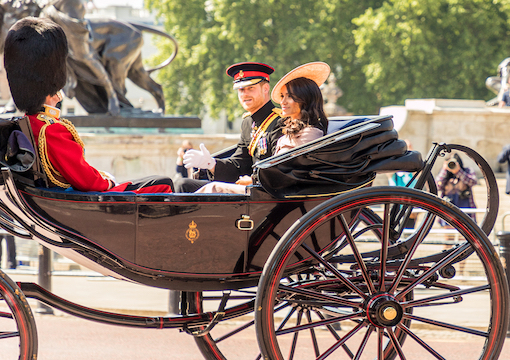 I never thought I’d get back to this silly subject ever again, but the Markles, as I now refer to them, have a way of getting our attention—and embarrassing Al Capone in the process. (As the feds were closing in on him, Al was told Chicago was getting too hot and he should move to Canada. “Canada?” growled Capone, “I don’t even know what street that’s on.”) Well, for any of you who, like Capone, have never heard of the place, Canada is a very big country run by an even bigger fool named Trudeau. But Canada’s fuzz dress beautifully in red tunics and shiny black boots and always get their man. And now this lucky country also has the Markles, or royal riffraff, as some embittered old British salts now call them. But let’s not be hasty. Looking back, it seems to me that royal romances have a way of ending up quite badly at times. Even 2,500 years ago.

Old Homer, who started the whole royal soap-opera thing, was anything but a fool. He created Helen of Troy as an innocent victim, totally manipulated by bad boy Paris and even by the much-too-proud Agamemnon-Menelaus brother act. I thought of Homer recently when a woman (not as beautiful as Helen, and much darker to boot) took center stage and is threatening to do to the House of Windsor what the Paris-Helen duet did to the House of Atreus.

As a 1960s zonked-out hippy would say, “Man, this is wild!” A class-D actress who is divorced and 38 years old, one of mixed racial background, marries a 35-year-old member of the British royal family and within two short years demands to be moved abroad, to Canada and California, to be protected by the British secret service at the taxpayer’s expense, and blames British racism for her move, having been so advised by close friends such as publicist Ken Sunshine, TV personality Oprah Winfrey, and close friends George and Amal Clooney.

Well, I’ve seen some of this stuff before. Don’t forget, Harry’s mother knew how to play the PR game as well as anyone. She played the “hated” tabloid press like a Stradivarius, and no matter how much her lovelorn son claims that the paparazzi killed his mother, the photographers had been forewarned that the couple would be leaving the Ritz in Paris. Her drunken chauffeur killed Diana, no one else.

“As a royal, Meghan was obliged to serve the crown, not to advance her career in Hollywood.”

La Meghan thought she knew how to handle royal media, but did not. Diana was upper-class and understood the limits. Meghan grew up hustling in Hollywood and had no idea of the world she had married into. Advised by hucksters and PR people, super-woke showbiz riffraff, dubious billionaires on the make, and bitter old pop stars like Elton John, she turned against royal advisers who counseled duty above all else. She saw only enemies around her, unless they were pop stars or their ilk. Her ace in the hole became racism, the magic word of the 21st century that opens all doors and buries all enemies. According to Meghan and her backers, the Brits are racists and have made her life intolerable because of her mixed blood.

We’ve read such crap again and again, mainly in The New York Times, a paper that has encouraged Meghan and her hubby, Harry, to keep playing the race card. (The New York Times has in the past five years written more lies than Pravda did in seventy, and the less said about the anti-white-male-Christian newspaper, the better.) The black population of Britain is 3 percent, yet no one was cheered more loudly and treated better than Meghan and her mother during her wedding. But then the bride suddenly went Hollywood, screaming at underlings, demanding total privacy, and refusing to attend to royal duties, duties that the couple were being paid to attend to by the civil list.

She began to lecture the Brits on poverty, and how awful poverty is, but when the lecture comes from someone whose wedding cost millions and was paid for by the taxpayer, and whose house cost many millions and was also paid for by the taxpayer, the message gets somewhat diluted. What it comes down to is leftist and repulsive grandstanding by people who are very rich, very self-serving, and very imbecilic. Neither of the duo has any conception of how ordinary people live their lives. In Meghan’s case, this is surprising because until she met Harry her life was not that of a star but of a struggling actress trying to make the grade.

What is not so easily understood is the couple’s intolerance for royal traits such as stoicism and patriotism. Instead they chose individual narcissism. Well, things did not work out. The 93-year-old Queen wisely said no, you can’t have both independence and tax-exempt, all-paid-for lives. This was the main point of contention: As a royal, Meghan was obliged to serve the crown, not to advance her career in Hollywood.

Mind you, the couple will still enjoy a rarefied existence—Papa is very rich and will pay—but Harry, I’m afraid, will end up a bag carrier for his wife. She believes in “brands,” and now they are a brand. If you don’t buy their brand you’re racists, all you suckers out there.