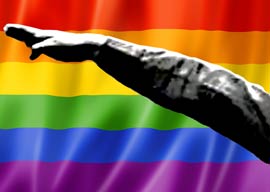 I”ve been called a fascist roughly six million times, and though I feel it’s an inaccurate description of my beliefs and temperament, I can see how people might get that impression.

Following WWII, the term “fascist” has almost always been used as a pejorative. The crushing defeat of the Axis Powers somehow forever “discredited” fascist ideology, but as far as I can tell, WWII only proved that the more efficient killing machine always wins and that might makes right, which would seem to buttress rather than undermine fascism”at least in practice if not in ideology.

Even before WWII ended, George Orwell was lamenting how the term “fascist” was overused to the point that it was “meaningless.” He said the most apt synonym for “fascist” was “bully,” but he cautioned against flinging the term with reckless impunity against those with whom one simply disagreed.

Not that anyone listened.

The current situation in Ukraine has both sides tossing the word “fascist” back and forth at one another like a hot potato. Hillary Clinton has compared Vladimir Putin to Hitler, while Putin claims that neo-Nazi forces have taken over Kiev.

“The problem with being an individual is that you always wind up outnumbered.”

Most would argue that “anti-Semitism,” whatever the hell that word means, is a fundamental component of fascism, yet others would disagree. Growing legions worldwide describe Israel as a fascist state, but Israel and its Big Dumb Dog enabler the USA claim that they are only fighting the scourge of “Islamofascism.”

Problem is, the word “fascism” has no inherent meaning. Despite their erudition, most would-be politicos and history buffs seem too dim to understand that political terms bear no fixed and eternal meaning. All political terms are social constructs and thus hold no objective value. Despite this fact, politics consists of endless hair-splitting and eternal internecine squabbling about what constitutes elastic and unquantifiable terms such as “left” and “right,” while I watch on the sidelines with equal measures of amusement and bemusement.

All political struggles require the use of force and coercion against the unwilling. If “fascism” is defined as the blunt use of force to silence dissent, all politics are to some degree fascistic.

The notion of innate equality would seem antithetical to fascism as the term is commonly understood. Yet since equality is a well-meaning human-generated delusion rather than a real or organic phenomenon observable anywhere in nature, it must be enforced by increasingly totalitarian measures. Thus, once the seemingly open-minded liberalism I knew and embraced as a kid started gaining power and steamrolling over all opposition, it metastasized into an all-consuming doctrine of coercion, shaming, groupthink, and unblinking thought-suppression that would fit most of my preconceived notions about what constitutes fascism. Modern leftist psychology is supremely collectivist and intolerant of dissent”two commonly accepted defining traits of fascism.

Global government, for all its pretenses toward harmony and rainbows and equality and drum circles, would centralize statist power, destroy individual freedom, and result in the most totalitarian entity in world history. Therefore, if you find “fascism” to be synonymous with “totalitarianism,” globalism would be the worst form of fascism imaginable”that is, unless one day the United Nations is supplanted by the United Planets.

To others, ethnic nationalism is the defining trait that distinguishes fascism from other forms of totalitarianism. At least as represented in fascist Italy and Germany, fascism opposed internationalism, which makes it preferable to globalism for those of us who distrust centralized governmental power. Over the years I’ve come to believe that tribal instincts, as opposed to class sympathies, may have a biological basis and thus be more stubbornly ineradicable than international appeals to class struggle. Therefore I suspect that over the long term, localized ethnic tribalism may have a longer shelf life than global economic brotherhood. Yet I say this as someone who doesn’t have a tribal bone in my body.