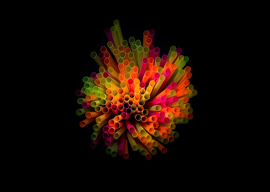 First of all, if there are 500 million plastic straws being used every day, that means there’s an obvious demand for plastic straws. People like plastic straws. They like them better than paper straws or—the alternative favored by the environmental movement—no straw at all!

The message is, “Why do you even need a straw? Just gulp that Slurpee from the lip of the cup.”

In fact, do you really wanna drink that 32-ounce Guardians of the Galaxy Big Gulp while driving? Then learn to tip it against the side of your mouth and who cares if a little Diet Orangeade coats the upper third of your Salvatore Ferragamo zip-front polo shirt, because we’re saving the world, okay? Dude.

So here’s my question for the “Get Rid of Plastic Straws” Movement, which has been going strong for about six years now and recently claimed victory in the form of Starbucks (no more iconic green plastic straws) and Marriott International (eliminating plastic straws in all hotels and, to make it clear how cool they are, plastic stirrers as well—that would be those doodads used to mix cream into hot coffee or vodka into Bloody Marys).

My question is: Why have you been yelling at us for the past thirty years to do the much simpler thing, which is simply drop the plastic straw into the recycling bag once you’re done with it?

By recycling bag I mean those extremely expensive translucent blue plastic garbage-can liners that we buy in bulk at Target and Costco so we can be responsible and make sure that, rather than sending throwaway plastic to a landfill or choking a dolphin with an Old Milwaukee six-pack twisty, all that stuff is directed toward the manufacture of ugly molded deck chairs for patios in Chagrin Falls, Ohio, like God intended.

“There are always two ways to solve a problem in America: the New Jersey way, and the California way.”

Are you following this? Ever since the ’70s we’ve been told to educate ourselves about recycling, buy the accessories, sort the trash, make sure the plastic goes to whatever mysterious MacGyver factory in the Midwest does the alchemy on it, and by doing that we’ll be following the example of the immortal Lady Bird Johnson, who coined the injunction “Don’t Be a Litterbug!”

There are always two ways to solve a problem in America: the New Jersey way, and the California way.

The New Jersey way is to take the admonition of New Jersey’s most famous native son, Thomas Edison, who said, “To invent, you need a good imagination and a pile of junk.” The spirit of this principle led to electricity, motion pictures, sound recording, many metals that are still used today, and, at the end of the great man’s life, experiments that would lead to the creation of synthetic rubber. If you create something that turns out to be a pain in the ass, like asbestos, you go get a new pile of junk, figure out how to make the asbestos safe or nullify the harmful effects.

The California way, on the other hand, is to say, “Get rid of it.”

Coal-fired plants are dirty—don’t clean ’em up, shut ’em down.

Offshore drilling platforms are ugly—don’t cover ’em up, just prevent anybody from drilling off the California coast, we can truck in oil from parts of the country that aren’t so squeamish.

And so, as the 500 million straws a day meme has percolated through the culture over the past half decade, the environmental movement has chosen the expensive, complicated thing over the simple thing. They’ve gone whole-hog California. The city of Miami Beach has banned plastic straws by law. Malibu banned the straws but then decided to ban plastic forks, spoons, knives, lids, and cups as well. A city councilman in Brooklyn is trying to get plastic straws banned in every restaurant in New York City. Alaska Airlines nuked the straws on board. McDonald’s is experimenting with paper straws in the United Kingdom with a view toward deep-sixing the plastic ones in a couple of years. Santa Cruz has gone the way of Malibu and gone them one better by going after plastic bottles, which is the real test of how far this thing can go, since there are approximately 3 billion California bikers, joggers, and aerobics teachers carrying those designer water bottles around. Could Celebrity Spin Class survive a total ban on plastic?

How do we know this? Because all these products are already being made from recycled plastic of the type used in plastic straws.

Why don’t we wanna do that?

If you ask a straw-hater, because it’s impossible to educate people about recycling the straws. (Not true. Japan recycles plastic at the rate of 83 percent and the number is still rising.)

Besides, the numbers are overwhelming—the operative statistic is 500 million a day!

The problem with this statistic—the statistic that has driven this movement since 2010—is that it’s based on a single study conducted in 2009. When National Public Radio went looking for the author of that study, they found him in Shelburne, Vermont. It’s a guy named Milo Cress, who noticed that straws were being handed out in restaurants regardless of whether the customer asked for one, was bothered by that, and went on to found a movement called Be Straw Free. But he couldn’t find any official statistics on straw use, so he called manufacturers, wrote down what they told him, and made an educated guess that the number was 500 million per day. It must have been a good guess, because he was rewarded for it.

He got an A on his fourth-grade science-fair project.