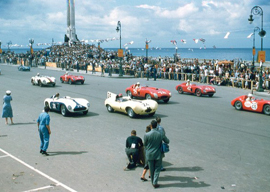 The first friend I made at Lawrenceville School was Reuben Batista, eldest son of the Cuban strongman. Being foreigners gave us something in common, the rest of the school being mostly WASPS with a smattering of Catholics. By the time I met Reuben in 1949 his father Fulgencio had been in power either directly or indirectly for nearly two decades. Havana was a paradise if one was rich and liked easy women, rum drinks, flashy nightclubs, and casinos. The disparity in wealth was shocking even back then, yet there was a sweetness of life, one that was lost in January 1959.

I visited Cuba a couple of times before Castro and found the people among the nicest in the area. Batista was always referred to as a dictator, which he was, but it was the most benevolent of regimes. In my young and limited experience, I never got the impression that the people were afraid to voice their opinions. I had some good friends such as the Garrido brothers, both Wimbledon players who were poor but comfortable and who had shown me around when I was in Havana.

“It’s all so phony it makes me want to puke.”

There are certain things that are now set in stone—for example, Batista bad, Castro good. The fact that people voted against Castro by leaving the island in the millions with only the clothes on their backs does not matter. The executions, the torture, the jailing of homosexuals, the totalitarian regime does not matter to the press nor to the academy. Castro was a man of the left; hence he was, is, and will always be good. Fifty-three years later the song is still the same. Castro and his brother are still the darlings of professors and media types. Castro sure knew which noises to make and how to stay popular with the intellectuals the world over.

It was the late 1950s, and there was a Grand Prix for sports cars in Havana. The Dominican strongman, Rafael Leonidas Trujillo, ex-father-in-law of Rubi’s, was a Castro enemy. My friend Porfirio Rubirosa was then the Dominican Republic’s ambassador to Cuba and had a hand grenade thrown into his garden early in the morning of the race. Rubirosa’s young French wife Odile claimed afterward that she and Rubi had been making love, otherwise they would have been killed in the garden. The great Argentine, five-time world champion Juan Manuel Fangio, was also set to race but had been kidnapped by Castro’s men that morning. Nevertheless the race went on. Rubi spun out early. Fangio’s kidnapping made headlines around the world. Then, just after the race, Fangio suddenly appeared, fresh and unscathed. He said his kidnappers had been kind—even friendly.